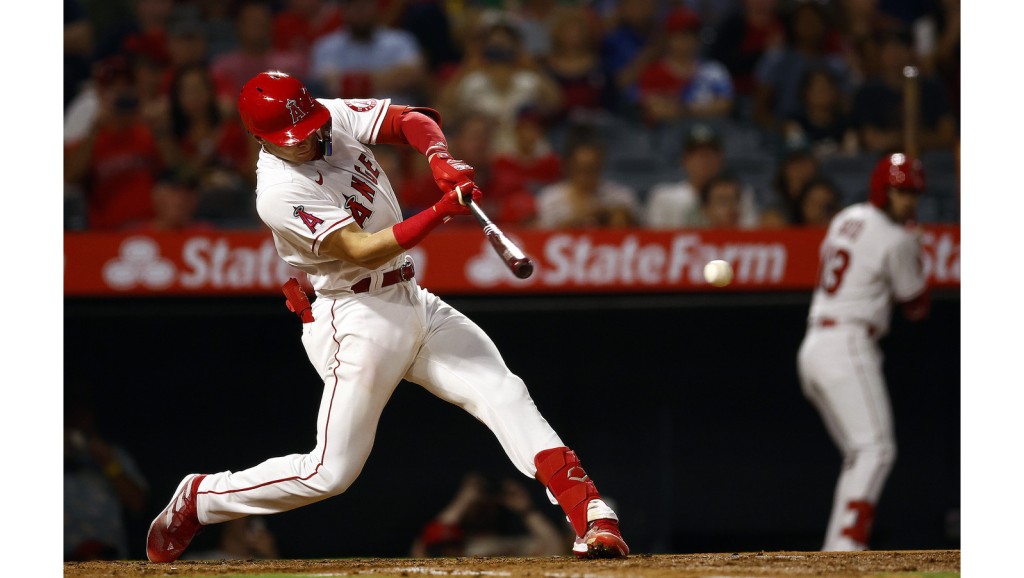 ANAHEIM — The Angels got their first look at the player they expect to be their catcher of the future.

Logan O’Hoppe made his big league debut in the Angels’ 4-1 victory over the Oakland A’s on Wednesday night.

O’Hoppe singled in his first trip to the plate, which was his only hit of the night, and he handled five pitchers in the victory.

The biggest negative of the game was that Mickey Moniak came out after getting hurt on a foul ball in the sixth. This year Moniak has already suffered a broken right hand, at the end of spring training with the Philadelphia Phillies, and a fractured left middle finger, in his first few days with the Angels.

Moniak came to the Angels in one of two trades with the Phillies at the deadline.

O’Hoppe came in the other deal, for Brandon Marsh.

The 22-year-old immediately became the top prospect in the Angels’ system, and he didn’t disappoint in his first two months. He torched pitchers at Double-A to the tune of a .306 average and a 1.147 OPS, with 11 home runs, in 29 games after the trade.

That was apparently enough for the Angels to believe he deserved a cameo in the big leagues at the end of the season.

“I’m really impressed with his makeup, the way he goes about his business, his presence, really everything as advertised,” Manager Phil Nevin said before the game. “Now it’s just a matter of getting between the lines. I’m excited to watch him play tonight. I know he’s excited. There’s a lot of people excited to watch him. I think this is a perfect atmosphere for him to get his feet wet in.”

Batting eighth, O’Hoppe lined a clean single up the middle, after falling behind, 0-and-2, in his first big league plate appearance.

In the fourth, he grounded out to shortstop. He struck out in the sixth, leaving the bases loaded.

As for his work behind the plate, the A’s stole two bases against O’Hoppe. On one, he bobbled the ball and couldn’t get off a throw. He made a nice play in the seventh, pouncing on a bunt and throwing to third to get a force.

The pitchers combined to hold the A’s to five hits and three walks while striking out 11.

Lorenzen gave up one run in the first inning, and then nothing else through five innings.

In the first, Lorenzen allowed a pair of hits and a walk, throwing 34 pitches before escaping the inning. His high pitch count forced him out of the game with 102 pitches after five.

Lorenzen might have just one start left to prove to the Angels that they should re-sign him and give him another shot at the rotation. Lorenzen has a 4.52 ERA after 17 starts and 91-2/3 innings.