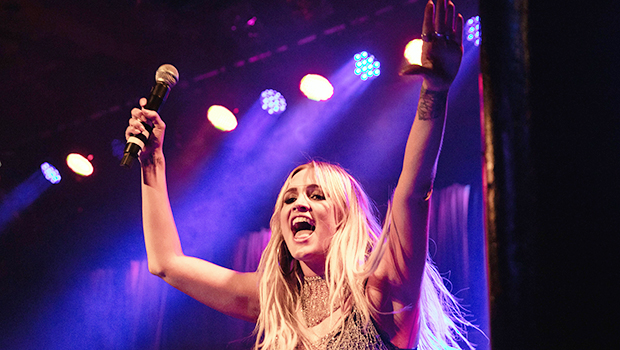 Bow down to queen Ashlee Simpson! The 37-year-old singer made a surprise appearance at Demi Lovato‘s concert at the YouTube Theatre in Inglewood, California on Wednesday night (September 28). Demi, 30, brought Ashlee out on stage and they performed Ashlee’s iconic 2004 hit, “La La,” which made the crowd at the Holy Fvck tour go absolutely wild.

“Please give it up for Ashlee Simpson,” Demi announced through the microphone, which received loud cheers and screams from the audience. Ashlee suddenly rushed onto the stage and started performing “La La” with Demi. Both superstars were dressed in black, with Ashlee’s look including a black jacket and a pair of grey trousers.

At one point, Ashlee got on her knees as she delivered the final note of the song, while Demi stood next to her and sang in unison with her. Ashlee and Demi shared a sweet hug when the performance was over, and one of the stars could be heard saying “I love you girl” to the other.

Ashlee shared a video from her performance with Demi to Instagram. The footage was taken from the back of the audience and showed the crowd enthusiastically cheering for Ashlee and Demi. Some of Ashlee’s famous pals applauded the “Pieces of Me” hitmaker for her fantastic on-stage comeback. Haylie Duff said, “This is amazing babe!! Always loved your music 👏👏.” Actress and YouTuber Ivanna Sarkis wrote, “Still ittttt why didn’t you tell me so I could come?!!!!”

Ashlee has put her music career behind her to focus on being a mom. She shares 13-year-old son Bronx Mowgli Wentz with her ex Pete Wentz, and also has daughter Jagger Snow Ross, 7, and son Ziggy Blu Ross, 1, with her husband Evan Ross. Ashlee looked back on the peak of her music career in an interview with I-D magazine in 2018, where she revealed what sticks out to her the most from that time.

“It is hard. When you’re in that moment you’re just going and going. But I look back and listen to those albums and I watch myself and how strong I was when I was younger and how I kept being creative,” Ashlee said. “I’m proud of myself.”