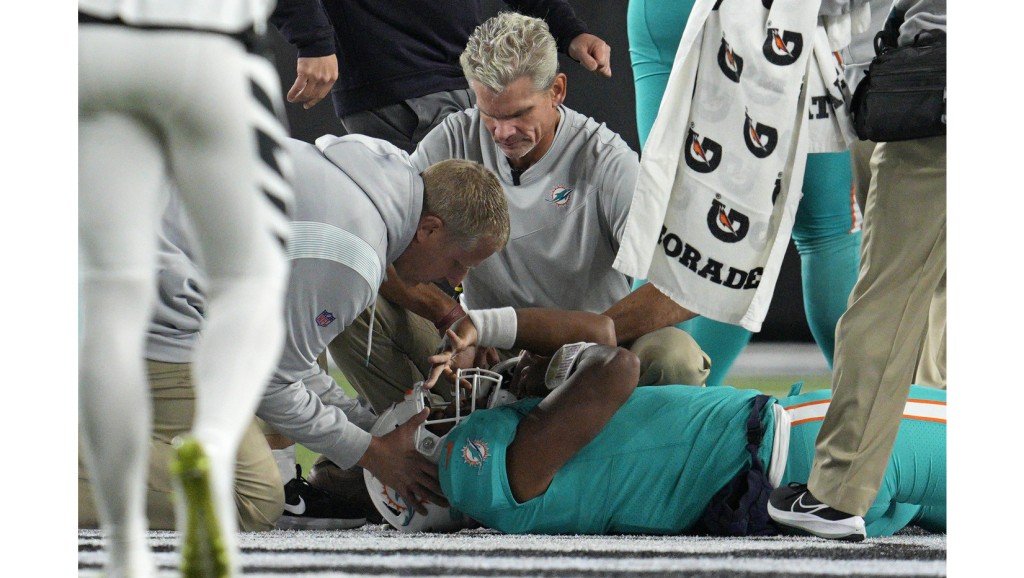 CINCINNATI — Joe Burrow tossed a late 2-yard touchdown pass to Hayden Hurst to seal a 27-15 win for the Cincinnati Bengals over Miami on Thursday night in a game marred by the horrific sight of Dolphins quarterback Tua Tagovailoa being taken off on a stretcher.

Tagovailoa was chased down and thrown to the turf by Cincinnati’s Josh Tupou with about six minutes left in the first half. While on the ground, his hands froze in front of his face. He remained down for more than seven minutes before being loaded on a backboard, stabilized and strapped to a stretcher after his facemask was removed.

Dolphins players gathered around as Tagovailoa was rolled off the field and the crowd chanted “Tu-a! Tu-a!.”

He was taken to the University of Cincinnati Medical Center with reported head and neck injuries. The Dolphins said Tagovailoa was conscious and had movement in all his extremities and he was expected to be discharged Thursday night and fly home with the team.

QB Tua Tagovailoa is expected to be discharged from the University of Cincinnati Medical Center and will fly home with the team tonight.

Vonn Bell’s interception of Miami backup quarterback Teddy Bridgewater – the safety’s second pick of the night – with three minutes left in the game set up the Bengals’ final drive.

Burrow was 20 for 31 for 287 yards and two touchdowns as the Bengals won their second game in five days after dropping the first of the season. Tee Higgins caught seven passes for 124 yards and a touchdown.

Bridgewater threw an incomplete pass on Miami’s final drive to turn the ball over on downs with 57 seconds left.

Tyreek Hill paced the Dolphins with 10 catches for 160 yards.

The 24-year-old Tagovailoa was suffering from a sore back and was listed as questionable for most of the week ahead of the game.

Tagovailoa briefly left Sunday’s 21-19 victory over the Buffalo Bills after appearing to be disoriented by what the team originally said was a head injury after taking a hard hit from Buffalo Bills linebacker Matt Milano late in the first half. He missed just three snaps and returned after halftime, a decision that prompted a joint review by the NFL and NFL Players Association of what went into the decision to allow him to return to the game.

The team and Tagovailoa said after Sunday’s game that he had a back injury that caused his awkward stumble and fall after he was slammed into the turf in the second quarter. The team said Monday that Tagovailoa was not in concussion protocol.

Miami originally said it was a head injury, but Tagovailoa said after the game that he hit his back during the fall.

At halftime, the Bengals added two players to their fledgling Ring of Honor at Paycor Stadium.

Isaac Curtis is regarded as one of the team’s all-time great receivers. The four-time Pro-Bowler played in Cincinnati from 1973-84 and still holds the Bengals record for average yards per reception (17.07).

Tackle Willie Anderson was considered one of the best offensive linemen of his era. Anderson played in 182 games (regular and postseason) for Cincinnati from 1996-2007 and went to the Pro Bowl four times.

Dolphins: Cornerback Xavien Howard left in the second half after suffering a groin injury.

Bengals: Tight end Devin Asiasi left in the second half with an ankle injury.

The Dolphins play at the New York Jets on Sunday, Oct. 9.

The Bengals play at Baltimore on Sunday, Oct. 9.