Can Polkadot bounce back at the current $6 support?

Polkadot (DOT/USD) has been facing extensive bearish pressure lately. The token is trading at $6.74 after a 2.38% drop in the past day and a 2.72% plunge in the past week, according to CoinMarketCap. The current price was last seen in December 2021.

The downward momentum in DOT has also contributed to a significant decrease in the token’s market capitalization. Polkadot’s market cap peaked at $53.21 billion when the tokens reached an all-time high of $53.44 in November 2021. The value has since sunk to $6.65 billion. 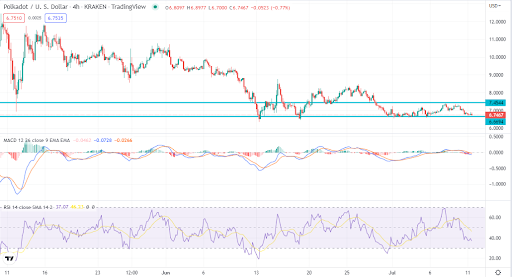 Polkadot’s 4-hour price outlook above shows a bearish price outlook based on the MACD indicator. Furthermore, the RSI reading is at 38, pointing the price could go lower. Overall, DOT is bound to trade lower, with the long-term and short-term technical outlook looking bearish.

Polkadot is a blockchain platform that supports parallelized chains, also known as Parachains. The network allows for the cross-chain transfer of tokens in interoperability. The network operates as a sharded multichain platform, meaning it can process multiple transactions simultaneously. DOT is the native token powering Polkadot used for fee payment and governance.

Fundamentally, Polkadot has positioned itself as the blockchain of blockchains. This way, the platform ensures that it creates an ecosystem of permissionless interaction among networks. Moreover, the blockchain has built a sidechain called Kusama for developers to test their projects before deploying on the main chain.

The value of Polkadot currently relies on the adoption of blockchain technology. As more projects deploy on the platform, the long-term value will increase. However, from the technical perspective, DOT remains bearish and could trade lower.

Is LUNC in for a steep price rise? Best places to buy LUNC

BNB is yet to rally despite Binance gaining New Zealand approval