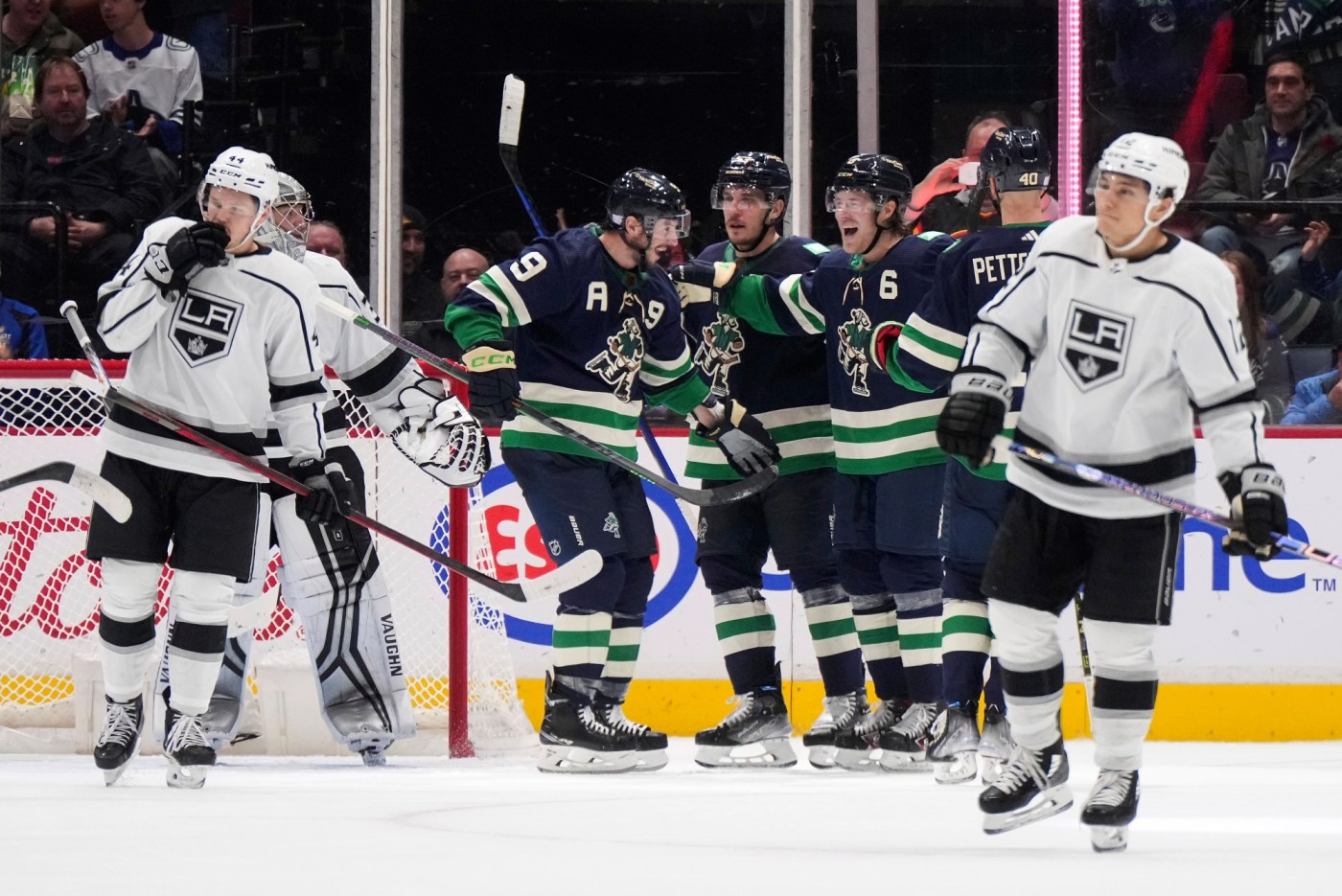 Brock Boeser and Elias Pettersson each scored twice and the Vancouver Canucks beat the Kings, 4-1, on Friday night.

Andrei Kuzmenko and Quinn Hughes each had two assists to help Vancouver win its second straight. Thatcher Demko stopped 37 shots to get his second win of the season.

Blake Lizotte scored and Jonathan Quick finished with 21 saves for the Kings, who had won five of their past six games coming into Friday. McLellan didn’t care for the style some of his players opted to play.

After a scoreless opening period, the Kings stormed into the second, outshooting the Canucks 7-0 across the first five minutes.

The Canucks made their first chance count, though. Pettersson and his linemates broke out on an odd-man rush and the Swedish center sent a wrist shot past Quick from the top hash marks at 5:40 to open the scoring on Vancouver’s first shot of the period.

Sean Walker’s cross-checking penalty gave the Canucks a man advantage midway through the period. Just 20 seconds into the power play, Boeser tipped in Miller’s one-timer and put Vancouver up 2-0 with his long-anticipated first goal of the season at 10:09, ending an 11-game drought. The elated right wing celebrated with an emphatic double fist pump.

The Kings got on the board with 6:14 left in the period when Lizotte redirected Walker’s shot from the side of the net to make it 2-1.

Just 1:04 later, Vancouver regained a two-goal cushion thanks to some persistent pressure. With the Kings hemmed in their own zone, Kuzmenko sent a pass across the slot to Pettersson, who fired a shot past the diving Quick for his second of the game.

“I think we talked lately about if we score or they score, we need to respond no matter what, not sit back,” Pettersson said of his team’s response. “So I’m happy.”

The Kings nearly chipped away at the deficit 2:59 into the third when Anze Kopitar rang a shot off the post. Demko scrambled in the crease to find the puck with teammates Oliver Ekman-Larsson and J.T. Miller also searching in the blue paint.

Boeser put away his second of the night at 5:07 of the third, batting the rebound of Sheldon Dries’ shot past Quick after the goalie made the stop on the initial shot.

“I’ve actually been working on tipping pucks a lot after practice so maybe it paid off,” Boeser said. “I was just happy to make contact. Any time you have a goose egg and you’re supposed to score and help the team win hockey games and we’re not winning hockey games, it weighs on you. That’s what I get paid to do so I’ve got to make sure I continue to find ways to put the puck in the back of the net and that comes with hard work.”

Canucks coach Bruce Boudreau believes both Boeser and Demko needed a game like this to build their confidence.

“You could see the smile on Brock’s face on the first (goal) and the second one is what he does. … So I’m very happy for both of them,” Boudreau said. “(Demko) has taken a lot of heat this year but he was the one that sort of made the difference in the game and that’s great. When you get good goaltending usually, everybody else is playing well too.”

Boeser has points in six straight games, registering two goals and five assists during the stretch. … Miller is on a four-game point streak with three goals and one assist.

Forward Curtis Lazar returned to Vancouver’s lineup after missing 10 games with a hand injury. The Canucks sent Will Lockwood back to Abbotsford of the AHL in response.

The Kings play at Seattle on Saturday night to complete a four-game trip.