Chargers may be without Keenan Allen and Mike Williams 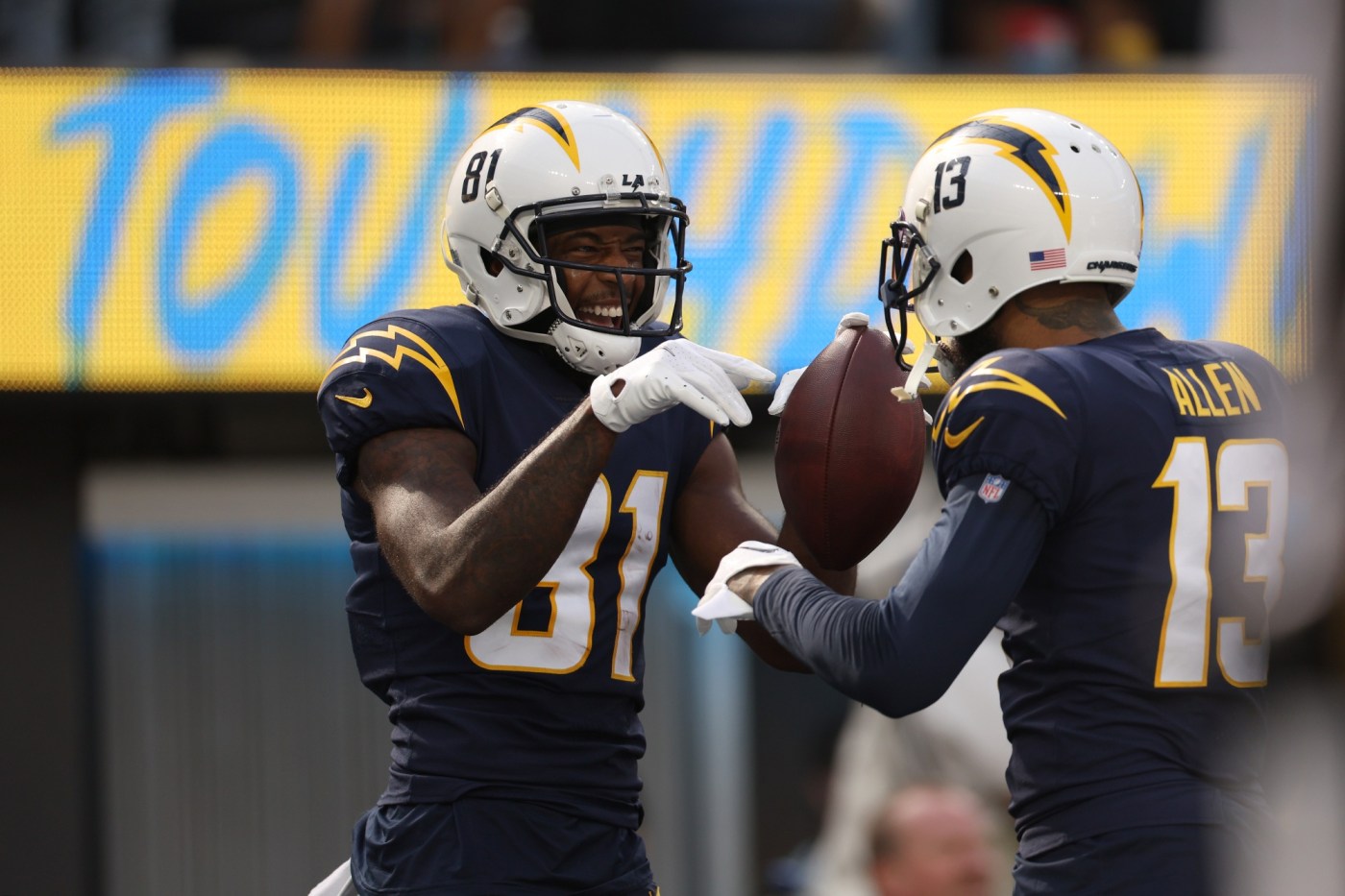 COSTA MESA — Keenan Allen didn’t practice Monday when the Chargers reconvened after their bye week. He didn’t practice Wednesday, either, as they prepared for Sunday’s game against the Atlanta Falcons, and he couldn’t say when his injured hamstring would be sound enough to play.

Mike Williams also didn’t practice on either day as he continued his rehabilitation and recovery from a high ankle sprain sustained during the Chargers’ 37-23 loss Oct. 23 to the Seattle Seahawks at SoFi Stadium. The Chargers don’t have a precise timetable for his return to the field, either.

So, exactly who will Justin Herbert throw the ball to when the Chargers play against the Falcons? More to the point, why didn’t the Chargers help themselves out of a potential bind for Sunday’s game and likely beyond by acquiring a wide receiver before the NFL’s trade deadline Tuesday?

The answer to the first question was actually pretty simple. Joshua Palmer, DeAndre Carter, Michael Bandy, Jason Moore and Joe Reed will likely form the Chargers’ wide receiver corps Sunday if Allen can’t play, and it certainly didn’t seem likely he would as of Wednesday.

The answer to the second question was more complex, so it was best that Chargers coach Brandon Staley explained why a trade for a wide receiver or edge rusher or lineman didn’t come to pass before the deadline. Draft picks and the salary cap apparently factored into their decisions.

“Nothing materialized,” said Staley, who indicated that the Chargers were active in talks with other teams about potential trades, but there were no deals to be completed that “were going to make sense for this season or next. It’s not just this season, but the years to come, too.”

“The strength of our team is we have all our assets,” he added. “We have all of our draft picks in every round next year. We have a healthy cap situation and we want to make sure we keep it that way, so we can have the type of offseason we had last year, where we can make moves that can really help your future,

“We want to make sure we have both of those things as healthy as we possibly can while making sure we’re in the mix and can compete with the rest of the league. I feel like we’ve done that. I like where our football team is at. I know the second half of the season we can bring it all together.”

Allen said he felt “great” while catching two passes for 11 yards against Seattle. But he also acknowledged that he was not at 100 percent, however. He said nothing happened during the game to cause a setback. Instead, it happened during the Chargers’ bye week.

“Nothing happened during the game,” he said. “We were just on a snap count (23 out of 71, as it turned out). Just taking my time with it. Just going through it how we planned it. Just do the bye week and hit it again. Just typical rehab. Running. I don’t think it was a re-strain or anything.”

Allen couldn’t say when he might be ready to play again.

“Whenever it’s ready to heal,” he said. “Just gotta let it do its own thing.”

“We’re just going to take it day to day,” Staley said. “I think anything is a possibility. We’re going to make sure that we do everything we can to get him back strong and get him back feeling his fullest, where he’s not out there having to figure things out, where he’s had it already figured out in practice.”

Palmer and tight end Donald Parham Jr. left concussion protocol and joined their teammates for Wednesday’s practice. Staley said it remained to be determined whether either or both could play against the Falcons. …

Staley said Larry Rountree III and Isaiah Spiller would compete in practice for the backup running back spot, as they did before the Chargers’ game against the Seahawks. …