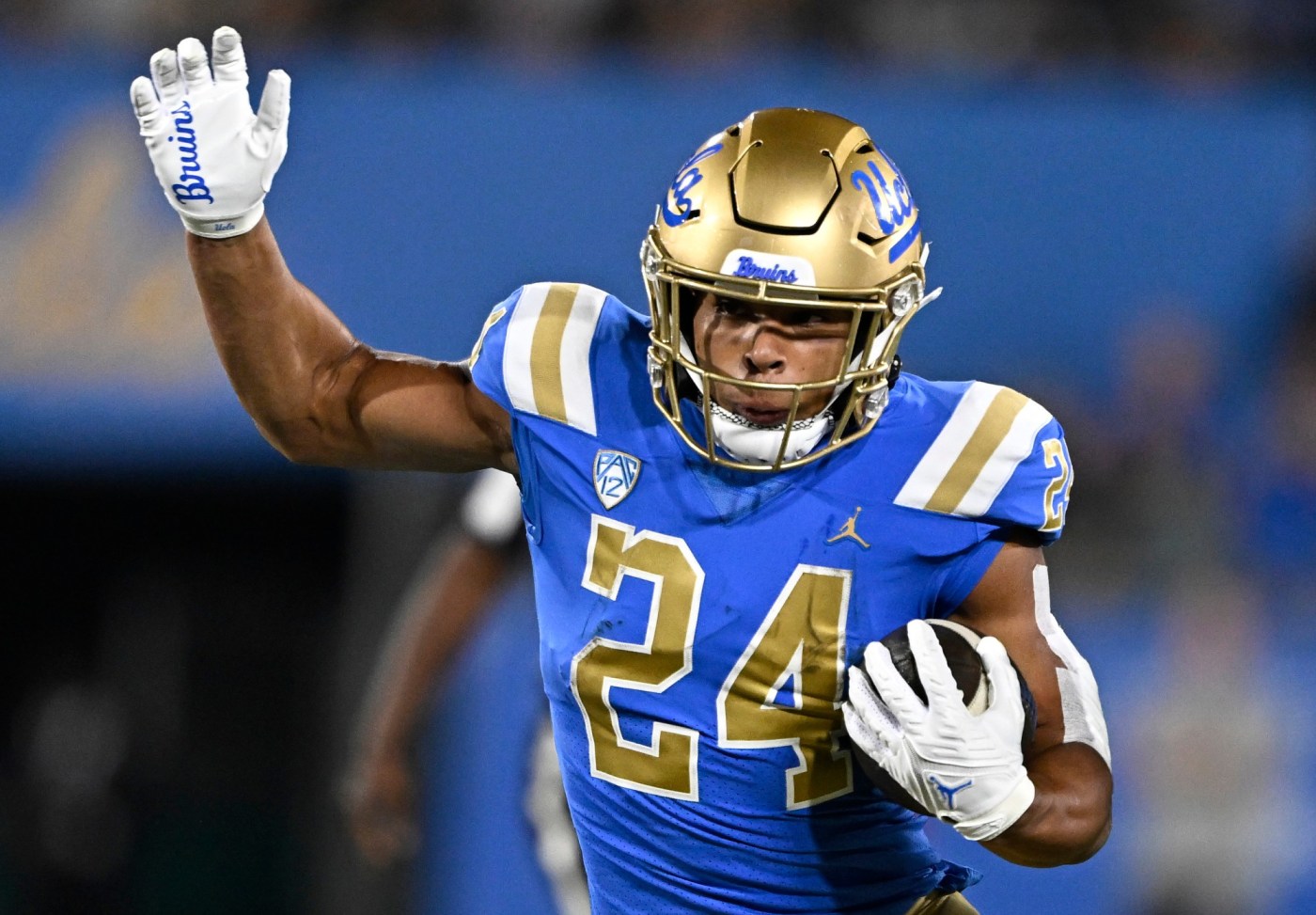 LOS ANGELES — Rain sprinkled down on Spaulding Field on Monday morning, soaking the Arizona navy blue scout team jerseys to the point that they appeared black.

“We get too comfortable sometimes in Southern California weather,” UCLA football coach Chip Kelly said. “I was excited that we had this for a couple days and get their focus on what the focus is. We can’t control the weather so let’s not worry about it. This is a good change of pace for us.”

The weather wasn’t the only thing different about the week’s opening practice. Zach Charbonnet appeared to be limited at practice and had athletic tape wrapped around his left bicep and left calf area.

Kelly said that Charbonnet is feeling better and “we’ll see what he can do today.”

The senior running back did not play in Saturday’s win at Arizona State. Kelly said on Saturday that after pregame warmup, he was unavailable.

Defensive coordinator Bill McGovern appeared at practice all last week, but was not out on the field for Monday morning’s rainy practice. Kelly said that he is back to work in the office.

McGovern did not travel to the Arizona State game due to illness. It’s the second straight game that he’s missed and was replaced with defensive analyst Clancy Pendergast.

Quarterback Dorian Thompson-Robinson pulled off yet another hurdle on Saturday, leaping over 5-foot-11 Arizona State defensive back Khoury Bethley to secure a first down at the 10-yard line.

As much as the action appears to be spontaneous, Thompson-Robinson plans ahead. The night before games, he watches film on the opposing team’s tackle tendencies. He watches how they tackle in open field and how they go after mobile quarterbacks.

“That gives me an idea of how guys on the field are tackling and who’s more of an ankle biter and not and who’s kind of has more of a solid tackle technique,” he said. “It’s all pre-planned for sure.”

When confronted with someone he’s confident he can hurdle, Thompson-Robinson squares up or does a maneuver to make the defender drop their hips.

“As soon as I see the hips drop, it’s over with,” Thompson-Robinson said.

Kelly has spoken with Thompson-Robinson about his hurdling habits in the past, emphasizing that protecting the quarterback is paramount, but the ability to hurdle can be an asset.

“It really depends on how people are deploying their tackling,” Kelly said. “Are there people diving at people’s legs? Then it’s a weapon that someone has on the offensive side of the ball has to be able to use.”

Back to basics on defense

The Bruins’ defense gave up 349 yards of passing offense and 468 yards of total offense in Saturday’s 50-36 win over Arizona State.

Sun Devils quarterback Trenton Bourguet was 38 of 49 for 349 yards and two touchdowns with one interception. He was sacked three times. Four receivers garnered at least 60 yards, with Xazavian Valladay leading the group with 92 yards.

“I talked to them a little bit after the game and I think with the amount of missed tackles we had, we’ve gotta do a better job in open spaces,” Kelly said. “And part of that is gang tackling, getting more than one guy to the ball. So it’s not just one guy making a tackle up the field.”

Linebacker Darius Muasau led the Bruins in tackles on Saturday with 12, followed by Kain Medrano with nine.

The defensive emphasis will not change this week at practice, according to Kelly, but he did mention that fundamentals are ever-important.

“Sink our hips and bend our knees and keep our eyes up,” he said.