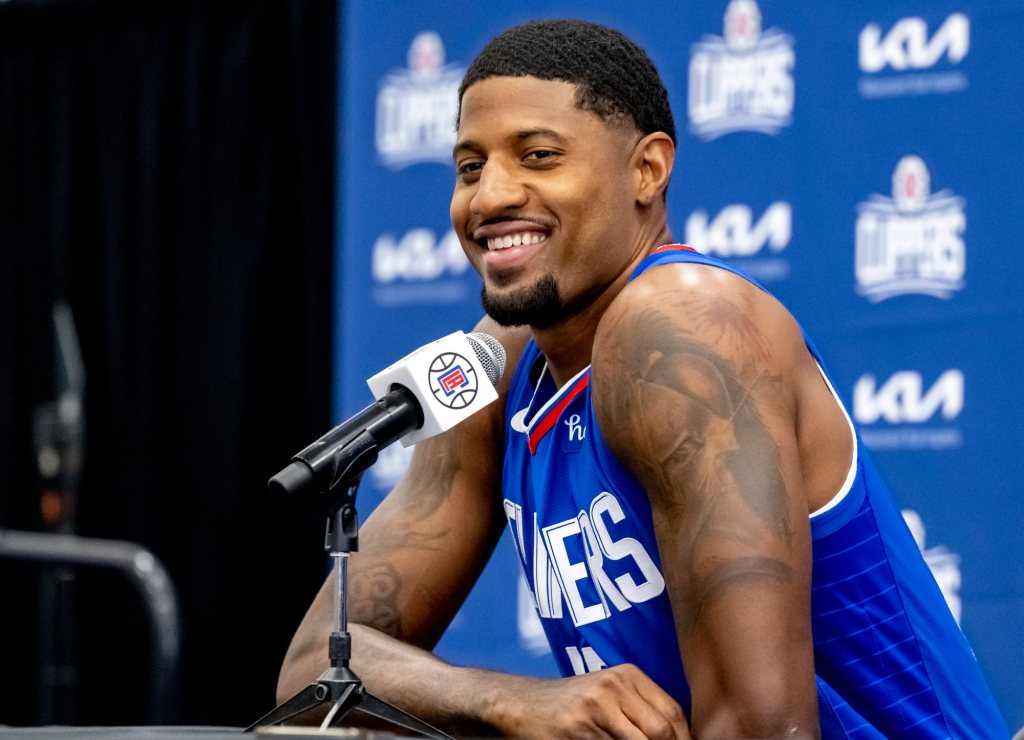 Maybe the excitement came from seeing a healthy Kawhi Leonard in uniform or hearing Paul George talk about their veteran roster or Coach Tyronn Lue’s eagerness to get back to work after last season’s disappointment of failing to qualify for the playoffs.

Or maybe it was simply Reggie being Reggie.

Reggie Jackson, the Clippers’ ebullient guard, couldn’t contain his excitement when talking about starting training camp Tuesday in Las Vegas with a deep, and healthy, roster – from Leonard to George to newcomer John Wall.

“I know, it’s crazy. I’m excited, because yeah – I’m excited to be back in this building. I’m excited to do what I love to do again,” Jackson said. “I’m excited it’s a new season, that guys allow me to be here, so far healthfully.”

Even the stoic Leonard seemed eager to get the season underway after missing last season because of a torn right anterior cruciate ligament. The two-time NBA Finals MVP has been cleared to fully participate when the team opens camp.

“For me individually, I’ll be participating in training camp,” Leonard said in his first comments since last season’s media day. “Then, from there, just seeing how my progression is, how I feel, what I’m not feeling, is it (knee) moving correctly, and just keep going from there, just gradually building up.

“But right now, I feel good, and the plan is to start camp and play.”

Wall, too, said he was ready to restart his career. He missed last season because of a torn Achilles, COVID-19 and the deaths of his mother and grandmother, which left the 12-year veteran with something to prove.

“I’ve got a chip on my shoulder. Anybody would,” Wall said. “Like I said, (I’m) happy I get the opportunity to play the game that I love; basketball is my sanctuary. When I step between those four lines, whatever I go through off the court I kind of cancel it out.”

Despite having played only 40 games over the past three seasons, Wall is expected to start at point guard. He said, however, he would do whatever will help the team.

“Whatever role T-Lue wants me to do I am willing to accept,” he said. “We all got an ultimate goal to what we’re trying to do. We got Kawhi that has two championships; we got T-Lue that’s won as a coach. We’re all a little older now in our careers and that is the ultimate goal is to try to win.

“So, it starts tomorrow taking every day, every practice like we a championship team, and hopefully we can get that goal.”

Leonard said he has been impressed with how well Wall is moving on the court.

“He’s been looking great. Let’s put it all on the floor and see what we can do. Like I said, we have a lot of talent here, and I think we’ll make something happen.”

With one of the deepest teams in the NBA, the Clippers have been tabbed as a contender to win the 2022-23 NBA title, adding pressure to their omnipresent health concerns. George said no one is backing down from the expectations. In fact, the Clippers are embracing the challenge.

“When you look at our roster, you look at the health of everyone on this team, it’s good. It’s good to have that pressure,” George said. “I think the fact of the matter is not a lot of teams get that pressure going into a season. So, for us, we honor that. We embrace that. We are very excited for what’s to come this year.

“Since I’ve been here, I think we have yet to have a full healthy season with everybody in uniform. (There’s) a lot of optimism there of what we can accomplish when we’re all full strength. (I’m) very excited. This year is definitely a great opportunity to win and win big, and I think everybody feels and senses that. You know, day one, we’re going to get after it.”

That was the kind of talk that made superfan Clipper Darrell, who showed up to media day in his trademark blue and red suit, applaud in loud approval.

Lue, however, tempered expectations. He said just because Leonard is healthy or George is back from his surgically repaired right elbow, there is still work to be done.

“We still have to put the work in and then go from there,” Lue said. “It’s not going to happen overnight. It’s not going to be easy. It’s going to be a process because we have a deep team with 11, 12 guys that deserve to play, and we know we can’t play that many guys every night.

“It’s going to be tough, but we’re up for the challenge, and I’m excited about the group we have.”