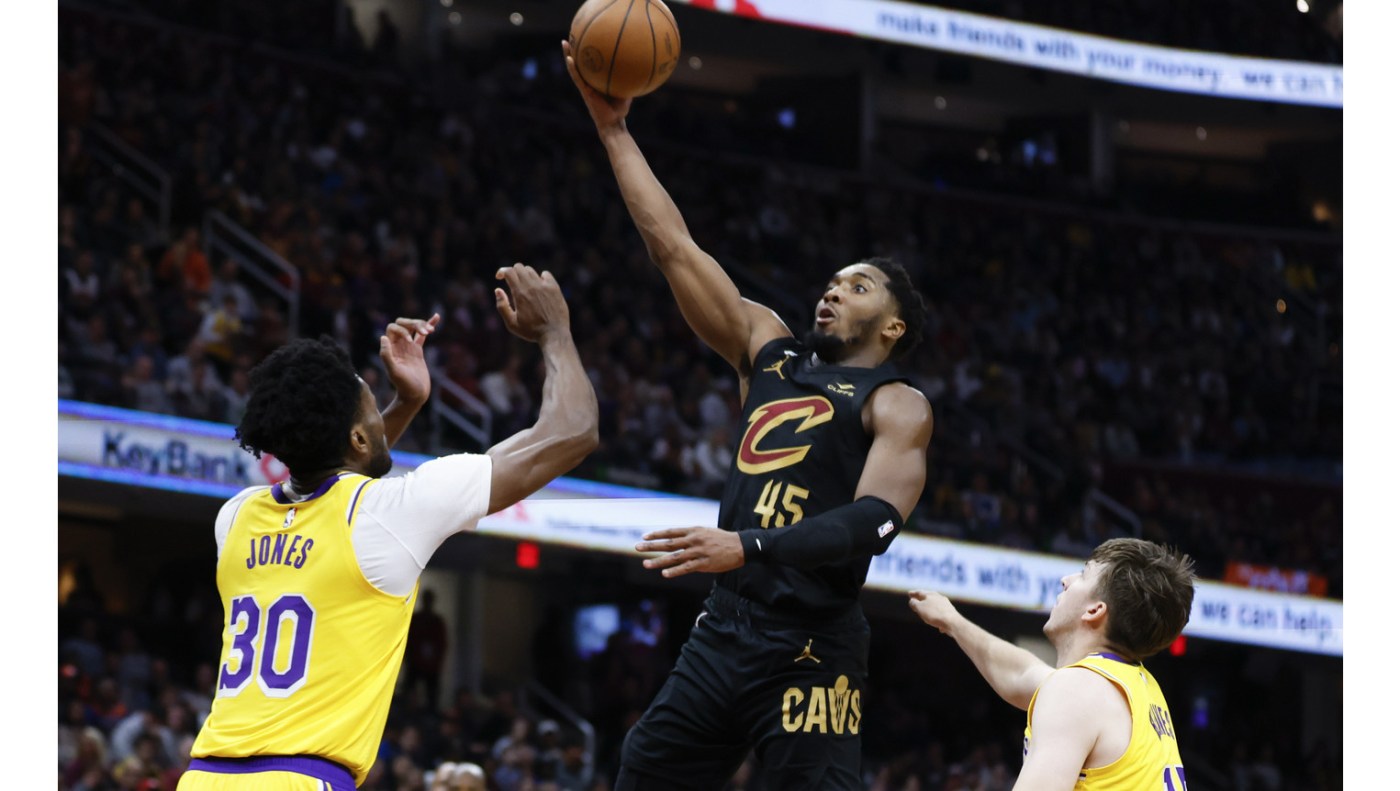 CLEVELAND — For the last two decades, there have only been truly two incarnations of the Cleveland Cavaliers: the team with LeBron James, and the team without.

With James, the franchise has seen its greatest heights, including a 2016 title that the city still treasures. Without James, the Cavaliers have succumbed to the city’s overall history of futility, and James has rubbed it in by winning almost every time he marches in with a visiting team.

But after 20 years, a new era of hope might be emerging for Cavaliers basketball even without their homegrown star. And unfortunately for James, the Lakers experienced the rising tide firsthand in a 116-102 loss on Tuesday night.

Offseason trade acquisition Donovan Mitchell dazzled with 43 points and five assists, zig-zagging his way past a Laker defense that was forced to play without star big man Anthony Davis, who left after eight minutes with flu-like symptoms. There were times when Mitchell even left James in the dust, particularly on a first-quarter spin move that ended in a lob to Jarrett Allen (24 points, 11 rebounds).

Mitchell said he told the Cleveland huddle that they should focus on themselves and shut out the inevitable audience swells for James, an Akron native who remains revered in these parts. But he admitted it was on his mind at times.

“You always want to spoil the homecoming,” he said with a grin. “I mean that’s just the competitor in you.”

Mitchell (17 for 27 from the field, 4 for 8 from behind the arc) turned it on late against the overmatched Lakers, scoring 29 points in the second half. From a 92-all deadlock, the Cavaliers (16-9) went on a 21-6 run that turned a tight contest into a laugher. The Lakers (10-13) only shot 42.7 % in the game without Davis, who scored 55 points on Sunday in Washington, and they were a dismal 6 for 36 from 3-point range. They also had twice as many turnovers (16) as the Cavaliers, leading to 18 Cleveland points.

“Under the circumstances, I’m not upset. I’m not distraught,” Coach Darvin Ham said. “I’m really disappointed because we competed hard. Just didn’t knock down enough shots and take care of the ball at the right time.”

Depending on how long Davis’ illness goes, it could cost them: The Lakers face a daunting turnaround with a Wednesday date in Toronto (12-12). Cleveland’s 70 points in the paint speak to a huge deficit on the defensive end that will be hard to replace.

James lost his first game in Cleveland since signing with the Lakers in 2018, dropping his overall record to 17-3 against the team where he played 11 of his 20 NBA seasons. The four-time league MVP’s 21 points matched the second-lowest scoring performance he’s ever had against the Cavaliers – they are the opponent against whom he enjoys his highest career scoring average (29.4 ppg). He muscled through it, adding 17 rebounds to compensate for Davis’ absence.

With the long-range shooting short-circuiting, the Lakers had to lean on interior offense. Russell Westbrook and Dennis Schröder provided that from their dribble penetration, attacking the basket for 16 points each. Thomas Bryant stepped in as the leading big man, competently scoring 19 points on 8-for-12 shooting.

But other typically reliable supporting cast members faired poorly. Lonnie Walker IV only was 3 for 10 from the field, and Austin Reaves was 3 for 9. Reaves was also the defender most scarred by Mitchell, who crossed him over on a third-quarter possession, then forced a turnover against Reaves seconds later and beat him down the floor on a one-man fast break.

James said even if Davis had been able to play, Mitchell would have given the Lakers headaches.

“Mitchell, he’s just Mitchell,” he said. “I mean, he did a great job of penetrating our gaps and making some tough shots all night and got into a real good comfort. But he’s a special kid.”

James’ return visit to his hometown franchise usually defines the evening for better or for worse. But while the Cavaliers played a clip of his famous NBA Finals chase-down block on the jumbotron and James waved to hearty applause, the Cleveland crowd got even louder as the night went on for Mitchell. By the end of it, they serenaded the guard with chants of “M-V-P,” the very chorus once reserved for James.

James later said he wasn’t surprised that the city has embraced Mitchell, a three-time All-Star who now has the Cavaliers on track to be in the playoffs for the first time since he played on the team.

“I mean, come on: That’s what Cleveland sports is all about,” he said. “From the Guardians to the Browns to the Cavs, the fans, they’re going to always support and be loud and that’s what they do. So I wouldn’t expect anything less than that.”