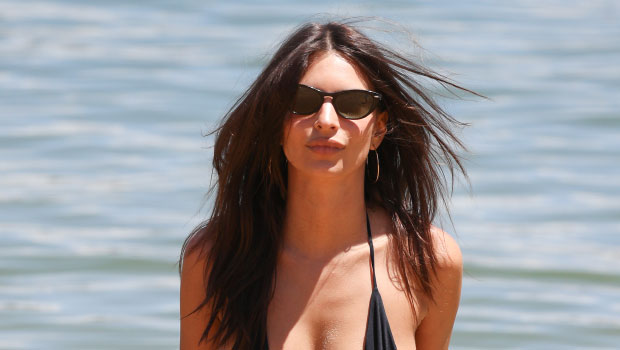 Emily Ratajkowski is soaking up the sun! The stunning model, 31, recently took to Instagram to show off her leisurely activities following her split from husband Sebastian Bear-McClard. “Cala pi,” the Gone Girl beauty captioned the eye-catching photo carousel posted to Instagram on Tuesday, September 27. In the first pic, Emrata was seen reclining on a rocky beach in a blue and green string bikini. She accessorized with oversized Gucci sunglasses, hoop earrings, and a straw cowboy-style sunhat. In the next photo, she enjoyed a refreshing drink, and in the third, she showed off her beachside snacks: a pomegranate and sardines. A third photo showed Emrata enjoying the sun on her face as she held her hand (decorated with a dark shade of nail polish) up to her neck. And in the final snap, she was seen looking at the camera as other beachgoers enjoyed the warm weather behind her.

It’s easy to see why fans would go wild over the possibility that she’s potentially dating Brad Pitt. Recent reports claim that the Legends of the Fall actor, 58, and supermodel have been out several times, though nothing appears to be confirmed as official (yet.) “People have been speculating about this for a while, sources told Page Six earlier this week. “Brad is not dating anybody. They [Brad and Emily] have been seen a couple times together,” they continued, adding that the actor has “been seen with other people” of late. The source added the tidbit, “Stay tuned.”

In any case, the model’s 29.5 million followers were there for her most recent beach pics, and took to her comments thread to gush over the new mama’s pics. “The most beautiful girl in the world,” commented one follower, while hilariously questioning her choice of beach snacks. “WTF pomegranate and anchovies???” “The dude behind you is forgetting to watch his baby,” quipped another, alongside laughing emojis. “I’m just strung out when you’re here,” admitted a fan, who added fire emojis to the comment. Several followers identified the idyllic spot as upscale vacation haven Mallorca, Spain.

Emily’s heavenly pics come on the heels of a divine nude bathtub photo with her son, 18 month old Sylvester, whom she shares with her ex Sebastian. She filed for divorce from Sebastian on September 8 after four years of marriage.