Firo price has gone parabolic. Are these gains sustainable?

The Firo token price went parabolic on Thursday as investors bought the dip. The token rose to almost $5, which was the highest point since April 8th of this year. It has jumped by more than 220% in the past 24 hours and about 317% above the lowest point this year. This rally brings its total market cap to over $43 million.

What is Firo and why is it rising?

Firo, previously known as Zcoin, is a privacy-focused cryptocurrency that aims to solve some of the challenges that popular coins like Bitcoin and Litecoin have. It is a highly secure coin that uses a hybrid proof-of-work and LLMQ (Long Living Masternode Quorums).

By so doing, the network is able to prevent against 51% attacks. The technology also ensures the quick finality of blocks and transactions. Firo has a maximum supply of 21.4 million coins and over 5000 master nodes.

Firo uses a technology known as Lelantus protocol that allows people to burn coins and destroy them so that they stop existing. You can then redeem them later for coins that have no history. As such this process helps to break the links between addresses, which makes transaction analysis difficult.

The developers are also building Lelantus Spark. This is a technology that akes the concept further with all amounts being hidden. It also removes the need to redeem.

Most importantly, Firo has built its on Elysium tokenization layer that lets people create their own privacy tokens. For example, one can use its technology to build stablecoins or voting tokens.

It is unclear why Fero price went parabolic on Thursday. A possible reason is that most privacy tokens like Zcash and Dash have also bounced back recently. 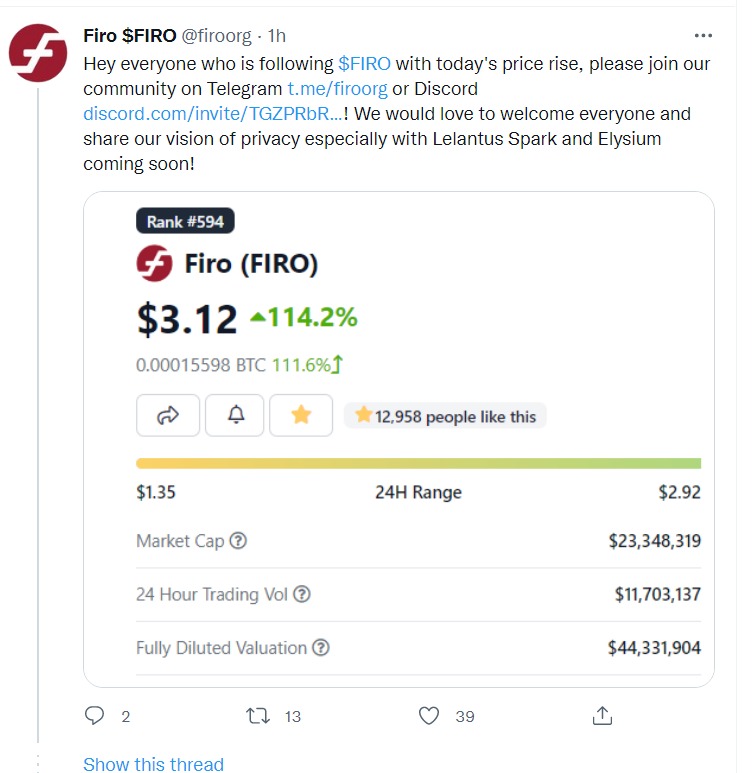 The daily chart shows that the Firo price went parabolic on Thursday. As it rose, the coin managed to move above the important resistance level at $1.74, which was the highest level this week. It also crossed the important 25-day and 50-day moving averages. Subsequently, key oscillators like the Relative Strength Index (RSI) and MACD have all jumped.

Therefore, I believe that these gains are not sustainable, especially in the current macro environment. As such, there is a likelihood that the coin will have a major pullback in the near term. If this happens, the next key support point to watch will be at $2.5.

Kickstarter is using blockchain to eliminate some of its challenges

KlimaDAO and Sushi use LINK for carbon offset on Polygon

What’s the bullish case for BNB as token initiates recovery?