Broader weakness in crypto is currently pulling down many altcoins like Helium. However, the coin appears to be showing some resilience in the wake of today’s crash. While most major coins are already down by double digits over the last 24 hours, HNT has kept losses well below 10%. But a more promising bullish setup could trigger a massive 85% rally. Here are some pointers 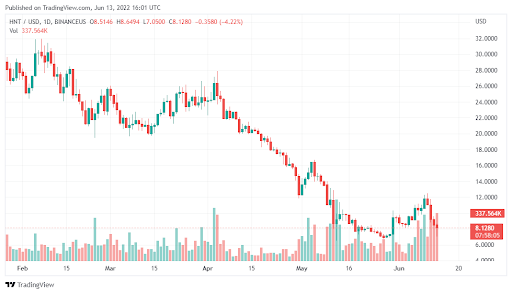 There are three crucial factors here that will determine if HNT will break or not. First, so far, the market appears to be crashing. We have also seen trade volumes plummet as investors step aside from crypto temporarily. As a result, sentiment may slow and this will affect HNT’s ability to consolidate the price above important support.

Remember a bull run only comes if the coin regains the $8.44 support and keeps the bears off. If the current weakness in the market persists, this may not happen. In fact, HNT could still plunge to its April lows of $6.59.

But despite this, the coin has shown some impressive resilience. If dip buyers jump into the market after today’s crash, then we could realistically see a scenario where HNT targets $12.5 and later $16.6 depending on upward momentum.

How soon will HNT turn around?

The good news about HNT is that it’s actually not that far away from the $8.44 support. The coin only needs an uptrend of 5%, and that’s it.

The only challenge will be to keep the price action above $8.44. With everything considered, the coin could hit $12.5 in about three months or thereabout.