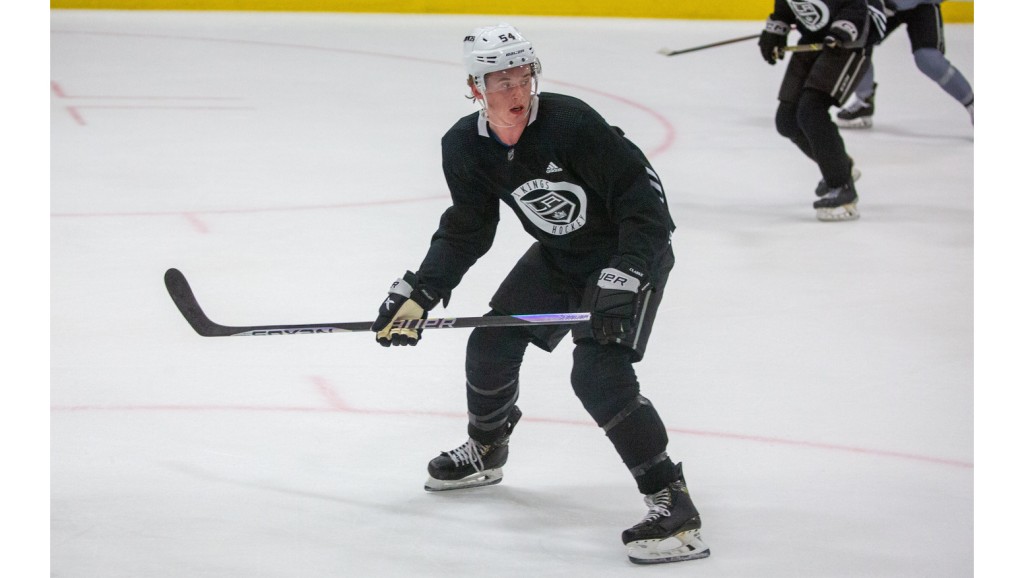 ONTARIO — Among a crowded field, the youngest defenseman in Kings training camp has already begun to stand out at just 19 years old.

Brandt Clarke, whom the Kings selected eighth overall in the 2021 NHL entry draft, might well end up back captaining his junior team, the Barrie Colts. But he’s already made that a decision worth considering at length for General Manager Rob Blake and his staff.

Clarke recorded a primary assist in each of his first two preseason games. He set up Carl Grundstrom’s goal Sunday and Kevin Fiala’s first goal as a King on Monday while playing 45-plus minutes over the two games, including more than 10 on the power play. On Wednesday, he ran the second power-play unit, which produced the Kings’ lone goal in a 3-1 loss to the San Jose Sharks. Clarke moved up and over to play left defense on the top pairing late in the game and he was out for a power play that could have evened the score before San Jose scored an empty-net goal.

Mark Seidel, Barrie’s director of player personnel and scouting, discussed Clarke’s development since his draft year and the prospect of him becoming a King this season.

“I’d be incredibly happy for Brandt if he stays in L.A.,” Seidel said. “He is a great kid and obviously we’d love to have him back but our main business is to help kids get better and get to the next level. He has done so much for our franchise that we would all love to see him play for the Kings.”

Clarke faces challenges from veterans and breakout players alike. There are nine other significant defensemen vying for a roster spot. Left-handed shooters Mikey Anderson, Alex Edler, Tobias Bjornfot and Jacob Moverare each suited up for 19 or more games last season. The right side, where Clarke typically has played, is even more densely packed, with stalwart Matt Roy, former Norris Trophy winner Drew Doughty and one-time mainstay Sean Walker, as well as two emergent blue-liners in Sean Durzi and Jordan Spence.

“The Kings have five right defensemen signed including Doughty, Durzi and Roy. That will make it tough but I’d never underestimate Brandt,” Seidel said.

Doughty underwent season-ending wrist surgery in 2021-22, but he appears to be 100 percent healthy. The same might or might not be true on opening night for some of the other defensemen.

Walker is actively monitoring his status and stamina after major knee surgery kept him out of all but six games last season. Durzi has been recovering from a shoulder operation that has limited his participation in training camp, though he expects to be ready to return before the season begins. Alex Edler sustained a broken ankle last year and hastened his recovery, then signed a one-year extension, half the value of which was in bonuses for crossing games-played thresholds this season.

All that could create the possibility of the Kings carrying additional defensemen. Additionally, Blake has said the Kings could start the season with at least one right-shooting defenseman on the left side. While Blake mentioned Walker and Durzi by name, Clarke has experience as well.

“I enjoy playing the left side, especially in the offensive zone. I like walking to the middle of the blue line with my stick already in the middle of the ice, which I think is a huge advantage,” Clarke said. “It comes with pros and cons, you’ve got to make plays on your backhand, which I’m comfortable with.”

The 6-foot-2, 190-pound Clarke was one of junior hockey’s top defensemen last season, but he was passed over repeatedly by Team Canada. Because of the postponement of this year’s tournament from winter to summer due to COVID issues, Canada had three chances in two seasons to name Clarke to its world juniors squad, but ultimately declined to do so at each turn. Clarke also saw his Barrie campaign conclude prematurely because of a lower-body injury.

“I think he took the snub from the Canadian World Junior team and used it for motivation. Instead of pouting, he worked twice as hard and you see the results with the Kings now,” Seidel said. “Despite some injuries, he really took the captaincy and ran with it, showing leadership with all our guys, even the 20-year-olds.”

Seidel concurred with Kings scouting director Mark Yannetti’s assessment of Clarke as the best defense prospect in his draft class behind top overall pick Owen Power. Yannetti said the Kings had multiple opportunities to move up in the draft, but they opted not to once it appeared likely Clarke would slip to them.

Since Clarke’s draft year, Seidel has seen up close and personal the commitment Clarke has demonstrated to his defensive ability, skating proficiency and strength training. He said those “areas have improved greatly since the Kings took him.”

As Clarke has put in work at the gym and earned more repetitions on the ice, he has received more opportunities to showcase his natural talents.

“Brandt is a gifted player. He has some skills that a lot of others don’t: vision, a sense of timing, deception and the ability to make something out of nothing,” Kings coach Todd McLellan said. “Those are all real good qualities in him. He’s had those for years and they keep getting better.”

While McLellan wouldn’t comment on Clarke’s prospects for this season yet, Seidel proffered a definitive longer-term prognosis for Clarke’s tenure in Los Angeles: “He will take over from Drew Doughty as the offensive catalyst on the blue line. Kings fans should be very excited about his future with them.”