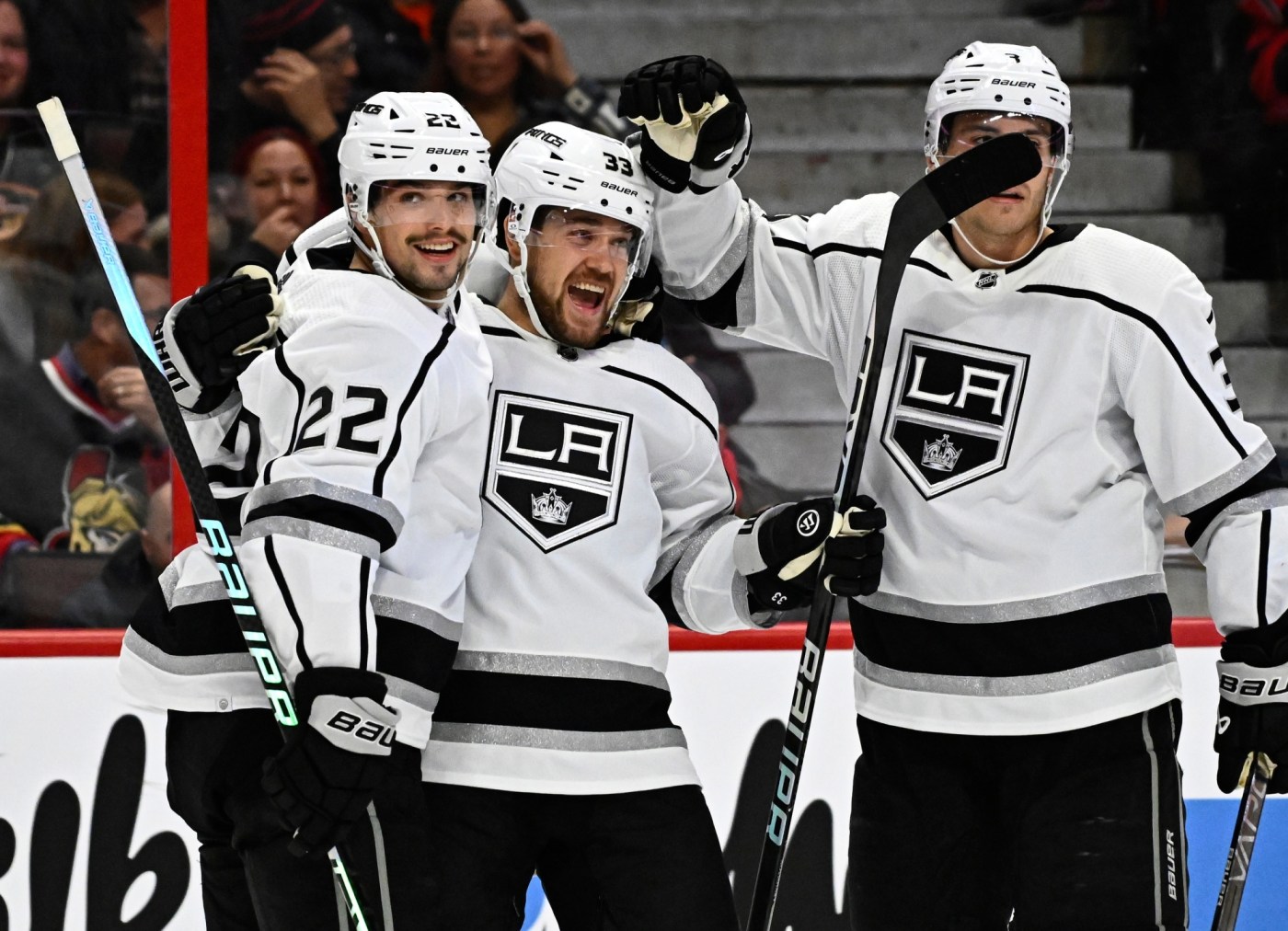 OTTAWA, Ontario — The Kings could not have started their road trip on a much higher note.

Viktor Arvidsson had two goals, Matt Roy, Mikey Anderson and Kevin Fiala also had goals, and Anze Kopitar registered three assists for the Kings, who kicked off a six-game trip with a 5-2 victory over the Ottawa Senators on Tuesday night.

The 30-year-old goalie has made just 26 starts but collected his third career win over the Senators on Tuesday.

“I felt good,” Copley said. “It was nice. The guys played well in front of me. It’s great to be in the win column.

“I thought (the team) played great, defensively. There were a lot of clears, a lot of blocked shots. If I left rebounds, they were taking care of them.”

Drake Batherson and Thomas Chabot each scored power-play goals for Ottawa, but the home team looked uninspired for long periods of play.

Talbot got chased from goal midway through the second period after allowing five goals on 14 shots. Anton Forsberg stopped all 14 shots he faced in relief.

The Senators were down 2-0 roughly two minutes into the first. Roy scored off a rebound, while Anderson scored from a sharp angle.

The Senators called a timeout and were able to cut the lead in half near the five-minute mark when Batherson roofed a Tim Stutzle rebound on a power play.

The Kings came right back and scored twice more before the end of the period to take a 4-1 lead.

Arvidsson scored his first of the night off a cross-crease pass from Trevor Moore on the power play and picked up his second just past the halfway mark of the period, beating Talbot with a wrister from the circle.

“I thought it was a complete game by everybody,” said Kings coach Todd McLellan. “We didn’t have to rely on just one or two people, starting with the goaltender. I thought he played really well and gave us some confidence.”

Senators captain Brady Tkachuk is as competitive as they come, and he could hardly stomach the lackluster effort his team put together in defeat.

“There’s no explanation, there’s no excuses,” he said, visibly frustrated. “It’s unacceptable and it’s on us. We just weren’t ready.

“For us to come out that flat and screw (goalie Cam Talbot) like that is just unacceptable. That’s not good.”

The Senators (10-14-1) were coming off two impressive wins and had victories in four of their last five outings.

“Of course, we’ve been having some successes of late so maybe we thought it was going to be easy tonight, but there’s no easy game, there’s no easy moment in the NHL,” Tkachuk said. “It’s unacceptable, it’s as simple as that.”

“Just flat,” Smith said. “Gave up way too many chances, didn’t check hard enough. You know, that’s on me. Our preparation to start the game starts with me as the coach and that’s certainly unacceptable, but my job is to make sure these guys are ready to play.”

Batherson felt his coach was letting the team off the hook.

“It’s not on him,” Batherson said. “The game plan was there, and we as a group as players just weren’t ready to go. It has nothing to do with the coaches. They had the game plan all set for us, we just didn’t execute it well.”

The second wasn’t much better for the Senators as they failed to show any real urgency despite trailing 4-1.

The Kings padded their lead midway through the period with a power-play goal when Fiala picked up his ninth of the season.

Chabot picked up his second power-play goal in as many games midway through the third period. But the accomplishment was overshadowed by his team’s play.

“Everybody knows we weren’t ready to play and that’s something as a group that can’t happen,” said Chabot. “Every night we know the way we can play and have success and that’s what we have to do.”

The Kings play at Toronto on Thursday at 4 p.m. PT.