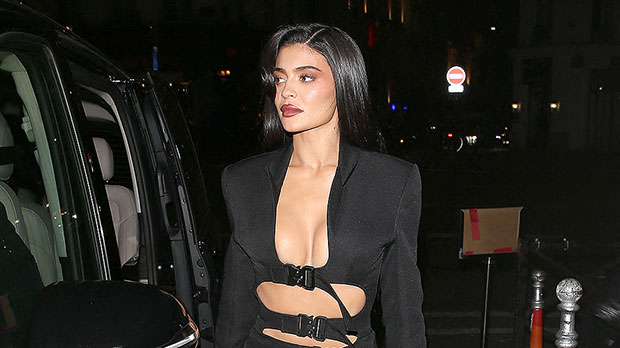 Another day another slay! The Kardashians star Kylie Jenner, 25, stepped out onto the streets of Paris in a sexy black bondage-style dress on Jan. 24. The makeup maven’s look took place during Paris Fashion Week, where she’s also been serving numerous stylish looks. For this ensemble, King Kylie rocked a black dress paired with black leather boots and transparent gloves. To tie the look together the 25-year-old opted to style her raven-hued tresses in classic Hollywood curls and even added a sultry brick-red lipstick color.

The mom-of-two made sure to share a behind-the-scenes glimpse of her makeup process for that evening via her Instagram Story. Along with the bold lip, Kylie decorated her eyelids with a shimmery gold eyeshadow and completed the makeup look with a perfectly pink blush. After a fan account re-posted her video, many of the bombshell’s fans took to the comments to gush over her look. Many of them simply commented series of heart emojis, along with kissy faces and flames. In another re-post of Kylie’s dress, her admirers also chimed in on her stylish outfit. “Omg she looks amazing!!!”, one fan wrote, while another added, “Holyyyy f*** Kylie looks good as hell.”

Kylie’s daring look comes one day after she wowed everyone with a black velvet dress that featured a faux lion’s head on the front. The dress was designed by Schiaparelli, who notably also designed other faux animal ensembles for fashion week. The TV personality later shared the look via Instagram on Jan. 23. “BEAUTY AND THE BEAST. thank you @danielroseberry and @schiaparelli for such a special morning. wow i loved wearing this faux art creation constructed by hand using manmade materials. beautiful beautiful,” she captioned the post.

In addition to both of these gorgeous black dresses, Kylie also came under fire on Monday for wearing a noose-like necklace with her blue Givenchy dress. For that look, the fashionista sported a long-sleeve dress, pink sequined boots, and nearly see-through sunglasses. Kylie posted the ensemble via Instagram on Jan. 23 and received some mixed reviews. “you are the queen of the fashion week,” one admirer wrote, while another chimed in, “You need a better stylist.” But of course, Kylie seemingly appeared to not let the haters get to her as she stepped out in the stunning cutout dress mentioned above the following day.

All of the showstopping outfits come three days after the former billionaire debuted photos of her son, Aire, 11 mos. on Jan. 21. “AIRE,” she captioned the photos via Instagram, along with a white heart emoji. The snapshots and name reveal came as a shock, as the proud momma bear kept his name under wraps for nearly one year. Originally, she and her on-and-off boyfriend (currently off), Travis Scott, 31, named their baby boy Wolf, however, she revealed that although that was his legal name it would be changed. She and the rapper also share daughter, Stormi, 4, who they welcomed in 2018.

Before & After Photos – Hollywood Life