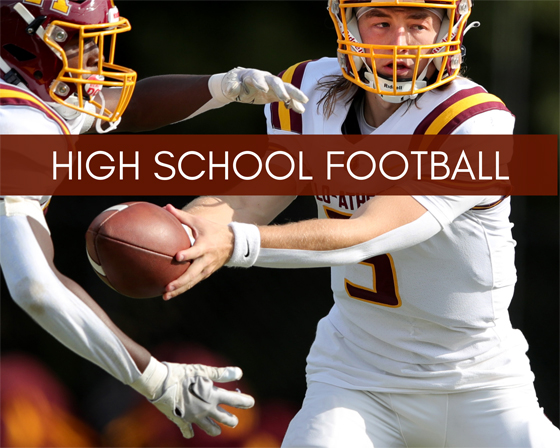 Breakers quarterback Jackson Kollock played a big role in the win with five touchdown passes, and their defense came through with some crucial stops in the second half.

Laguna Beach (10-3) advances to its first CIF-SS final since 1962. The Breakers will play at Diamond Bar next week.

“We had to hang in there,” Laguna Beach coach John Shanahan said of the victory.

“We got the one stop that we needed. We said it at halftime, we just need one stop. We got that one stop and it all worked out.”

The Breakers got the scoring started first with Kollock’s 46-yard touchdown pass to Sam Garwal in the opening quarter.

Norte Vista (9-4) responded with a long drive and was inside the Breakers 5-yard line, but fumbled the ball and it went through the end zone. The Breakers took over possession.

The Breakers responded with another Kollock touchdown pass, a 15-yard score to Ryner Swanson.

The Braves scored their first touchdown on Favae Sola’s touchdown pass to Anthony Alaniz from 5 yards.

Norte Vista scored with eight seconds left in the second quarter on a 19-yard pass from running back Dominick Johnson to Eli Martinez that cut the Breakers’ lead to 27-21 at halftime.

Norte Vista got the ball to start the second half and took its first lead a Richardson touchdown run, his second of the game.

“We try to clog him as much as we could,” Laguna Beach junior Nick Rogers said of Richardson. “We had to keep fighting. We clogged him up to not get those yards and first downs.”

After failing to score for the first time in the game, Laguna Beach sent in freshman Lachlan Soloff to punt the ball, which he placed inside the Norte Vista 5.

The Braves’ ensuing drive was stopped and they had to punt, giving Laguna Beach another chance to take the lead.

The Breakers responded with a Kollock touchdown pass to Nick Rogers. Kollock converted the 2-point conversion pass to Brock Donaldson to put Laguna Beach up 35-28.

Kollock threw another touchdown pass to Rogers to go up 42-28, but the Braves weren’t giving up.

Richardson ran for this third touchdown of the night from 6 yards, but the Breakers secured the win after that.

Laguna Beach is heading to the CIF-SS finals for the first time in 60 years.

“We are all really excited,” Garwal said. “We cannot wait to play Diamond Bar. No matter what happens, our team is going is have memories that we will cherish forever.”

Martinez caught three passes for 39 yards and a touchdown and ran for 26 yards on six carries.

Rogers rushed for 156 yards on 16 carries while catching five passes for 76 yards with two touchdowns.

Swanson caught four passes for 45 yards with two touchdowns and Garwal caught two passes for 55 yards with a touchdown to go with a game-high 12 tackles on defense for the Breakers.