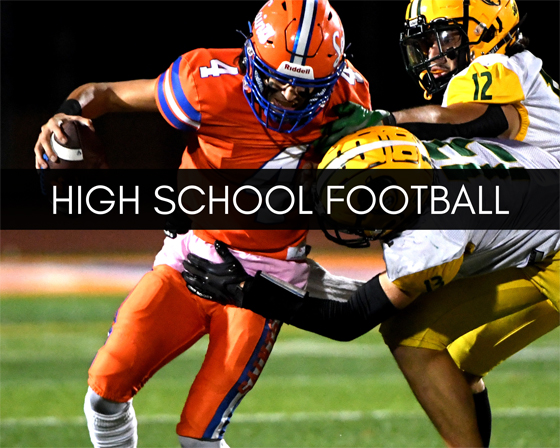 IRVINE – Expectations were not sky-high for the Northwood football team after it won the 2021 CIF Southern Section Division 11 title with a senior-laden team.

But the Timberwolves now stand one victory away from a second straight title after manhandling Vista del Lago 41-14 in their Division 8 semifinal Friday night at Irvine High School.

The Timberwolves (12-1) will face Lakewood in next week’s title game.

Adam Harper ran for 114 yards and a touchdown, and Eugene Miyata threw for 210 yards and three TDs as Northwood overwhelmed Vista Del Lago.

“We knew their game plan was probably to come stop the run, and we’ve been able to run the ball so well they had to bring some guys up and that set up the play action,” Harper said. “Our guys were open downfield and our quarterback was hitting them with ease.”

The first quarter made it clear the visiting Ravens were in for a rough night.

The Ravens (9-4) trailed 13-0 by the time they ran their second offensive play, and they had 7 yards of total offense in the first quarter.

Harper’s 13-yard touchdown run capped a brisk 68-yard, six-play drive to open the game. It started with Miyata’s 14-yardcompletion to Kaden Carter on a play-action pass, followed by Miyata’s 29-yard keeper after faking a handoff to Harper.

“We have a great running back for this division in Adam Harper, and everybody keys on him,” Northwood coach JC Clarke said. “He’s the best running back I’ve had in 48 years.”

After Harper recovered a fumble on Vista del Lago’s first play from scrimmage, Carter sparked the ensuing 41-yard drive with a 35-yard reception, then scored on a 3-yard sweep when he took a direct snap while in motion.

Harper scored on another 13-yard run in the second quarter, then Miyata lit up the Ravens with touchdown passes of 19 yards to Ahmad Kazi, 43 yards to Joseph Harper and 30 yards to Ryan Kelser in a span of 5:14 in the third quarter.

Vista del Lago got on the board with Amir Stephens’ 7-yard touchdown in the second quarter. But Northwood was an insurmountable obstacle in the Ravens’ hopes of reaching the section final for the first time.

Quarterback Jaylen Patterson tried to put the Ravens on his back. He threw for 134 yards and ran for a touchdown. But he was sacked three times and lost a fumble at the Northwood 1-yard line.

Defense and special teams smothered the Ravens. Harper also recovered a fumble, Andrew Penrod blocked a punt, and the Timberwolves had six tackles for loss as the Ravens were held to 78 yards rushing.