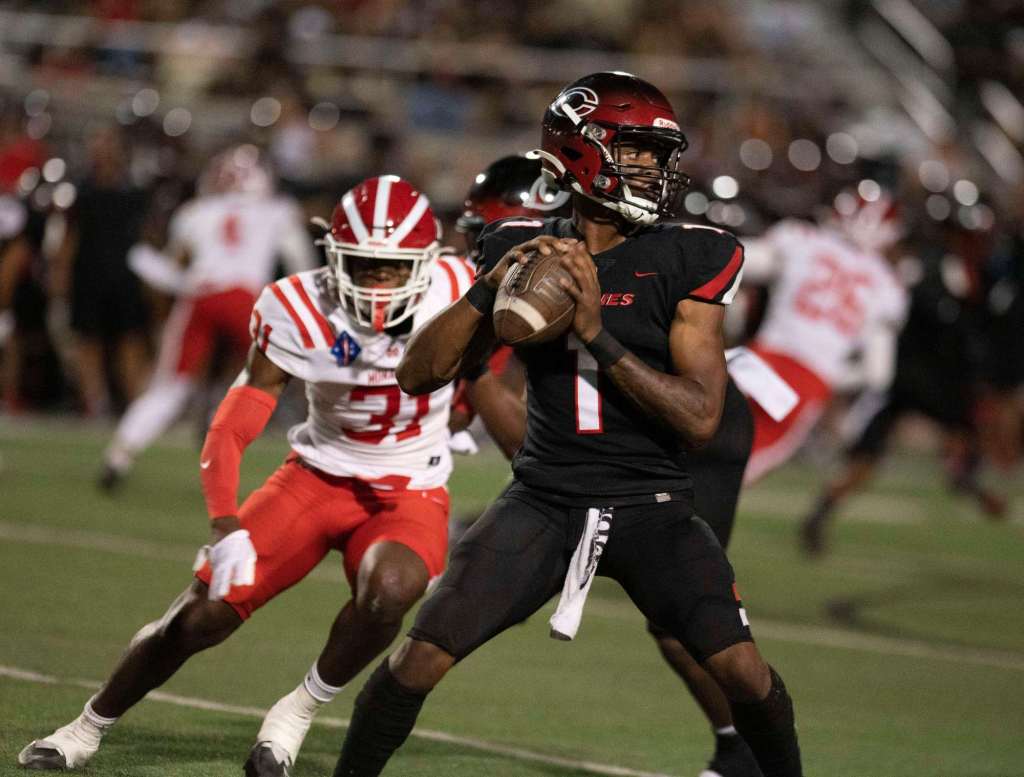 A majority of Inland football teams begin league play this week. This is the first year of a releaguing cycle for schools in the Citrus Belt Area, so a handful of teams will be competing in new leagues this season.

Here are my championship predictions for the 11-man leagues that include at least one Inland team.

Baseline: This is one of the most balanced leagues in the area, and every team is capable of winning in a given week. Etiwanda is the league’s defending champion but suffered heavy losses to graduation. Rancho Cucamonga’s passing game in explosive and should carry the Cougars to the championship.

Big West-Upper Division: Centennial is the overwhelming favorite to win the championship, and the only question is how many running clocks there will be this season. The real battle will be for second; Murrieta Valley seems to have a slight edge over Norco, Roosevelt, Vista Murrieta and Chaparral.

Big West-Lower Division: Temecula Valley, which has advanced to back-to-back section finals, would seem to be the favorite to win the lower tier of the new conference. The Golden Bears will have to hold off a few strong challengers, however, including King and crosstown foe Great Oak, to take the crown.

Citrus 4: Colony had the best nonleague results of the league’s four teams, but Glendora has added a handful of transfers who now are eligible with the sit-out period expiring this week. Colony is unbeaten at home this season, and the Titans will use the home-field advantage for a close win over Glendora.

Citrus Belt: Cajon has won 28 straight league games, the longest active streak for an Inland program. The Cowboys’ top challenger in recent years has been Citrus Valley, and that should be the case again. Citrus Valley has let leads slip away from Cajon before, but the Blackhawks get the job done this year.

Cottonwood: Maranatha is the favorite to win the inaugural championship in this league. The Inland team with the best chance of spoiling the Minutemen’s quest for the title will be Santa Rosa Academy.

Desert Valley: Coachella Valley should be able to hold off challenges from Indio and Yucca Valley to secure another league championship. Banning looks to improve on last season’s sixth-place finish.

Hacienda: Diamond Bar won its first five games of the season and quickly established itself as the one to beat in the league this season. The Brahmas will have to beat Walnut on the road to claim the title.

Ironwood: Longtime Ambassador League foes Aquinas and Ontario Christian lead the contenders in this newly-formed league. The teams meet in Week 9, and Aquinas comes out on top to claim the title.

Ivy: Orange Vista has ascended to the top tier of the Raincross Conference, and the Coyotes are the overwhelming favorites. Elsinore has title hopes, as well, and the Tigers host Orange Vista next week.

Manzanita: Silver Valley is the favorite to win another newly-formed league. The Inland team with the best chance at spoiling Silver Valley’s championship hopes appears to be St. Jeanne de Lestonnac.

Mesquite: Capistrano Valley Christian should win the inaugural title in this league, but a trio of former Ambassador League teams (Arrowhead Christian, Linfield Christian and Western Christian) stand in the way.

Miramonte: This is one of the more unique leagues in the nation because the four teams play each other twice. The Pomona schools, Ganesha and Garey, separated themselves last week in the first league games. The teams appear evenly-matched, so I’m going to predict a shared championship.

Mountain Pass: This remains one of the easier leagues to predict a league champion, as San Jacinto has too much talent not to finish on top of the league standings. The race for second place should be intriguing, however, with Tahquitz and newcomer Liberty likely to secure the other playoff berths.

Mountain Valley: Miller is the defending champ and despite some rough moments in nonleague play, the Rebels can’t be counted out. San Bernardino and Indian Springs meet Friday night in a game that could decide the champion. San Bernardino wins and ultimately claims its first league title since 1999.

Mountain West: All four teams are guaranteed to enter league play with a winning record, making it one of the stronger leagues from top to bottom. The championship race appears to be between Ayala and Charter Oak. Ayala wins at home in the league opener and goes on to claim the crown.

Mt. Baldy 4: Baldwin Park and Montclair are the frontrunners in this league. Baldwin Park has beaten Montclair each of the past two season and will do so again en route to securing another league title.

River Valley: Norte Vista is the defending champion, and the Braves are still in the title picture despite heavy losses to graduation. The league championship likely will be decided when Norte Vista travels to Ramona in Week 9. Ramona’s experience will be the difference in that battle of Riverside programs.

San Andreas: Carter, Grand Terrace and Rim of the World should enter league play on equal footing. All three teams could emerge on top, but Rim of the World claims the championship in a photo finish.

San Antonio: Claremont and West Covina are headed for another league championship showdown in the final week of the regular season, West Covina edged the Wolfpack 10-7 last season to win the title, but Claremont will exact some revenge and claim the championship this season.

Sierra: This is another league where the league champ likely will be decided during the final week of the regular season. Covina holds off a challenge by Chino to defend the league title.

Skyline: All six teams enter league play with losing records, making it one of the most difficult leagues to predict a champion. Rialto holds off Notre Dame and Colton to claim the title.

Sunkist: This will be one of the most exciting league races in the Inland area, as Eisenhower, Summit, Jurupa Hills and Kaiser appear evenly-matched. Eisenhower and Jurupa Hills will meet in the league opener in Week 8. It’s a tough call, but Jurupa Hills holds off the Eagles to successfully defend its title.