Polkadot’s DOT/USD traded down 3.74% in the last 24 hours at press time on Wednesday. The declines in the week are now around 5.87%. The slide happened despite the bulls seeming to have taken control after a breakout of key resistance. A range of technical indicators suggests that further declines are possible. However, we are not yet in a bear market.

There has been no major news from Polkadot lately, and most recoveries are due to market momentum. Expectations that the FED is unlikely to be too aggressive in its policy stance are boosting markets. 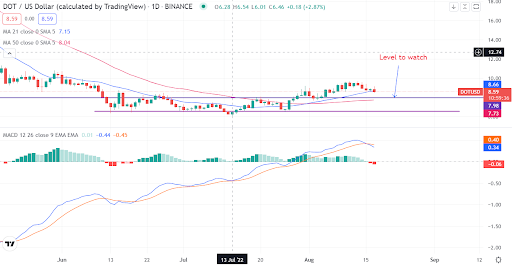 The daily chart technical outlook shows a bearish MACD crossover. The cross over suggests a continuation of the current weakness. DOT is also about to crash below the 21-day moving average. At the current price of $8.57, the token eyes $8.0 next. We expect a retest of the support soon before bullish reversal.

Polkadot’s bullish move remains in place. The current slide is a correction that is likely to see the token retest the $8.0 support. The support coincides with the 50-day moving average suggesting that DOT is unlikely to slip below $8.0. Investors should monitor prices for a chance to buy at the support.

SAND down by 2% despite The Sandbox’s partnership with Aguero

Mara Schmiedt says institutions are getting serious about staking

Binance obtains a licence to operate in Kazakhstan

Key breakout looms for Ripple XRP/USD. Here is the price action and analysis.