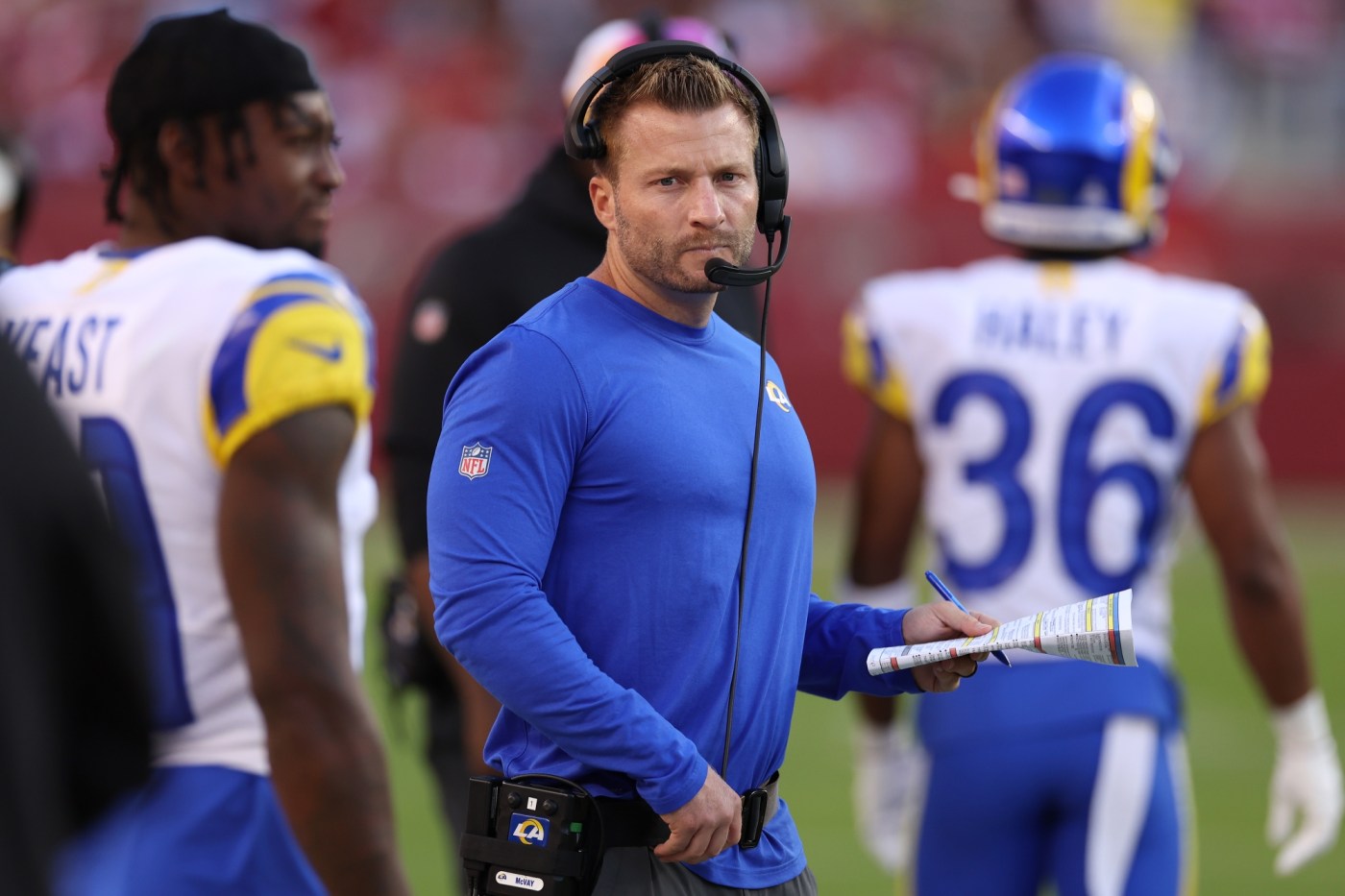 INGLEWOOD — Sean McVay’s offense getting shackled by Bill Belichick and the New England Patriots in Super Bowl LIII was a humbling experience for the then second-year head coach of the Rams.

But McVay getting outcoached by one of the greatest coaches of all time on the big stage, a place many coaches have never reached, might not qualify as real adversity.

McVay and the Rams losing three consecutive games last November might have felt like adversity at the time, but not anymore – not when his innovative side is being questioned by his best offensive player.

Rams wide receiver Cooper Kupp wasn’t pointing the finger solely at his head coach for the poor offense this season. Kupp wants collective innovation from coaches and players, because feeding him double-digit targets on a weekly basis with one of the worst offensive lines and running games statistically in the NFL isn’t working.

McVay, the young coach known for offensive ingenuity, has a boring and predictable offense, and at 3-5, the Rams might be one loss away from becoming an afterthought in the race for the NFC West title. Even the 2019 team – the one time McVay missed the postseason – stayed relevant until late December with a final record of 9-7.

Can the reigning Super Bowl champions win at least nine games? It’s not looking likely at the moment, and now the Rams might have to play the Arizona Cardinals on Sunday at SoFi Stadium without starting quarterback Matthew Stafford, who’s in the concussion protocol. The 3-6 Cardinals, who are dealing with their own adversity, might not have quarterback Kyler Murray, who’s a game-time decision with a hamstring injury.

This is the most adversity in a season that McVay has faced in six seasons with the Rams and he’s not debating it.

“Yeah, there’s no question,” McVay said. “This is another example of adversity. But that’s one of the things that’s great about sports is … part of life is handling adversity and dealing with the different circumstances and situations.”

“Well Sean, don’t tell him I said this, he’s extremely spoiled, first of all,” Morris said. “Out here in L.A., man, we’ve done a lot of winning. … They’ve done such a great job, so this being the first time and the first opportunity for real adversity, not November last year, but real adversity when you’re behind the chains, behind the sticks so to speak when it comes to win-loss record. Some of the struggles that we’ve had as a team, as far as offense or whatever the case may be, some of the struggles he had just across the board with personnel, people, injuries, whatever the case may be, this is the most adversity he’s had.

“But it’s a great opportunity for you to get that coach speak out and to go act on those things, to show mental toughness, to show the will to fight back, to show all those things that we want to be, to show our attacking mentality, to show how we’re not going to just lay down for anybody.”

A frustrated McVay said changes were coming for the broken offense, which is averaging 16.4 points per game, during his postgame news conference last week after recording eight three-and-outs drives to allow Tom Brady and the Tampa Bay Buccaneers to steal a 16-13 victory.

Rams cornerback Jalen Ramsey held the offense accountable by criticizing their performance. Ramsey and the Rams’ defense were forced to return to the field for Brady’s last-minute game-winning drive after the offense failed to get a first down to close the game.

“We ain’t had it like this though, you know what I mean?” Ramsey said about dealing with adversity. “It’s different.”

Kupp and the rest of the Rams’ offense had no issues with Ramsey’s critical comments because they know the offense has failed to step up several times this season, leading to why Kupp wants innovation.

“It’s not for a lack of effort,” Kupp said. “It’s not that the guys aren’t coming in here working, preparing. I do think there’s an element of being able to find ways to innovate. I don’t think the process and preparation changes. I think there’s needs to be some innovation and some ways … maybe you as a player, attacking a certain way. Maybe looking for other ways to win. Maybe there’s other techniques, things that you can do, things that either win games or win your one-on-ones. I see that’s something that we need to be able to think about. Effort’s there. You get in these places and it also opens up some room for innovation and find ways.”

Kupp suggested ways his teammates can be innovative on the field, but it’s up to McVay and the coaching staff to scheme creative offensive game plans. McVay said changes are coming, but he might not have a choice with backup quarterback John Wolford in line to start if Stafford isn’t given clearance.

Teams that fall to 3-6 tend to fade around Thanksgiving and the focus becomes more about the young players developing for next season with fans regularly checking mock drafts to see which college prospects could best help next season.

The Rams don’t have a first-round pick in 2023 because they rarely think about next season with bold trades to help the present. McVay and the Rams are in rare territory with a must-win-like game against the Cardinals in Week 10.

With or without Stafford, McVay needs to rise to the challenge of real adversity by getting his offense out of this rut or next year might come early this year.