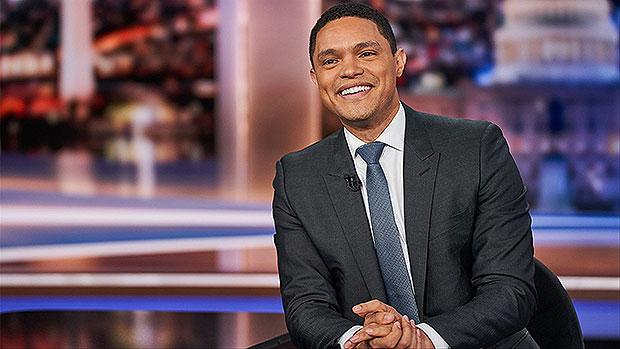 Trevor Noah seems to be getting a whole new start! The Daily Show host, 38, confirmed Thursday, September 29, that he is turning in his mic and moving on from the popular Comedy Central series. Trevor made the announcement that he is leaving in a heartfelt statement at the conclusion of the show. “It has been seven years since we started The Daily Show With Trevor Noah,” he said, in part. “And one of the overriding feelings I’ve found myself experiencing throughout the night and even today waking up, was a feeling of gratitude.” Trevor continued, thanking his audience for the experience.

“There’s so many people who make this thing come together,” he added. “And I want to say thank you to the audience for an amazing seven years. It’s been wild.” Trevor admitted to the audience during the Thursday taping of the show in New York City that he would be leaving, according to two sources who disclosed the news earlier in the day for Variety. It’s not yet clear when he will step away, or who will be his replacement. HollywoodLife reached out to Trevor’s rep for comment, but didn’t hear back by the time of this publication. “My time is up,” he said at one point, to audible gasps from the audience. “We’ve laughed together, we’ve cried together. But after seven years, I feel like it’s time.”

The previously nearly-unknown comedian said running the show had been unexpected for him. “I never dreamed that I would be here,” he said during the roughly 5 minute farewell monologue. “I sort of felt like Charlie and the Chocolate Factory, I came in for the tour of what the previous show was, and then the next thing I know I was handed the keys.”

“We are grateful to Trevor for our amazing partnership over the past seven years,” a statement from Comedy Central read, per Variety.  “With no timetable for his departure, we’re working together on next steps As we look ahead, we’re excited for the next chapter in the 25+ year history of The Daily Show as it continues to redefine culture through sharp and hilarious social commentary, helping audiences make sense of the world around them.” Since he took over hosting duties in 2015, Trevor has followed in the footsteps of other sharp-tongued comedic geniuses, including Jon Stewart, who hosted from 1999-2015, and Craig Kilborn, who hosted from 1996-1998.

Dua Lipa’s Boyfriend: Everything About Who She’s Dated Amid Trevor Noah PDA