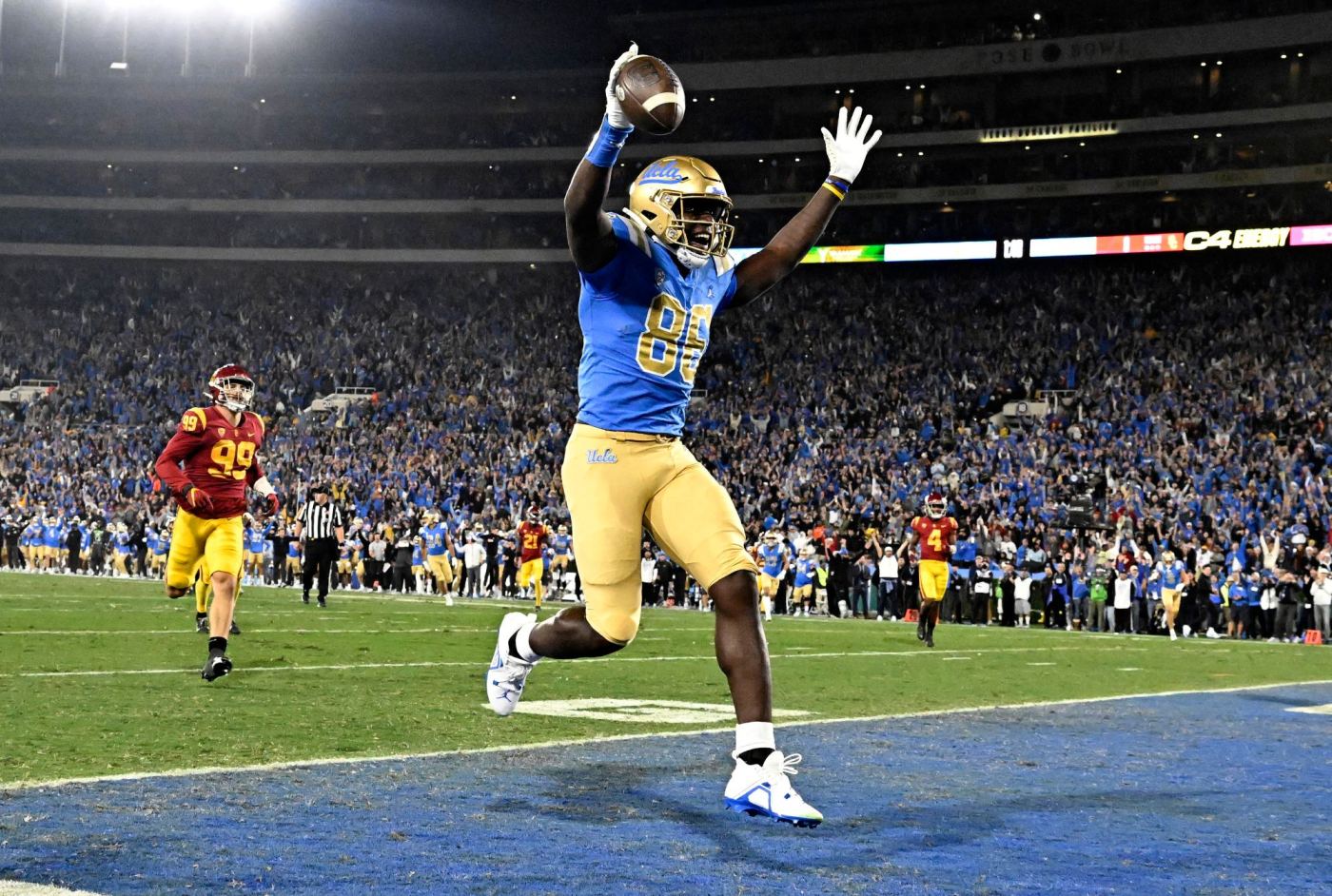 LOS ANGELES — UCLA tight end Michael Ezeike produced a notable performance in what is expected to be his final home game at the Rose Bowl.

Ezeike had a career-high three touchdowns along with 44 yards on four catches against USC on Nov. 19. The three touchdowns against the Trojans matched his career total in his first four seasons with the program. He scored his first touchdown this season on a nine-yard reception Nov. 5 at Arizona State .

“It felt really good,” Ezeike said on a night when he was one of 27 players honored during the senior night ceremony. “I couldn’t ask for anything more. They just called my number and I made a play three times.”

The tight end had to display a level of patience on the first touchdown pass from quarterback Dorian Thompson-Robinson.

Ezeike went right across the field uncovered by the USC defense then made his way upfield near the right sideline before breaking his stride and slowing to adjust to the trajectory of the ball. He made the catch before turning back to run the final five yards toward the end zone.

“It was a long 30-yard pass,” Ezeike said. “It was just me looking at the ball and the lights were in my eyes and I was just like ‘Man, I have to catch this. This is a big play.’”

INT leads to a quick-strike TD for UCLA!

The touchdown followed linebacker Kain Medrano’s interception of USC quarterback Caleb Williams’ on the previous play. The Bruins had built a 14-0 lead at the end of the first quarter.

Ezeike is in his fifth year with the program, after taking advantage of the extra year of eligibility provided by the NCAA for participating in the 2020 pandemic-shortened season.

The Ontario Colony High alum was mostly recruited as an outside linebacker, but the ability to play offense, as a receiver, for the Bruins made UCLA an appealing destination, according to Bruins coach Chip Kelly.

As Ezeike continued to grow into his 6-foot-5, 252-pound frame, he became the latest Bruin to transition from receiver to tight end. Current teammate Hudson Habermehl and former teammate Greg Dulcich, who was drafted by the Denver Broncos in April, also made that transition.

“It’s a byproduct of (Ezeike’s) work ethic for him to perform that way,” Kelly said. “We thought we had a big wideout (coming out of high school) and we knew if he continued to grow he could be a good tight end because there’s a toughness there,” Kelly said. “For him to be recruited as a defensive player speaks to his toughness and what he’s like playing physical football.”

He was not participating in his normal capacity at practice but was embraced by defensive back Mo Osling III among other members of the program.

“It’s been a little awkward not having him out here or on the sidelines and hearing his voice,” Bruins defensive back Alex Johnson said. “It was really cool to see him out here and glad he is doing better.”

Kelly was asked before practice if there was any update on McGovern’s status, to which he replied: “No, not right now.”

McGovern has missed the past four UCLA games, including three played at the Rose Bowl.

The Bruins have lost their last two games, with the defense allowing 34 points against Arizona and 48 points against USC. Those were two of the three largest point totals UCLA has allowed all season. The defense allowed 45 points in a loss to Oregon, the last game McGovern coached before his absence.

McGovern was a late scratch for the homecoming game against Stanford on Oct. 29. Members of ESPN’s broadcast team for the game mentioned that they had spoken with McGovern the day prior.

Defensive analyst Clancy Pendergast has moved into the coaches’ booth on game day in place of McGovern in recent weeks.

“The guys love Coach Pendergast,” Johnson said. “He’s a really down-to-earth guy, he knows the defense well and knows what he is talking about. He came in and did the job and made the right calls. It’s been a lot of fun being under Coach Pendergast and learning from his direction.”

UCLA running back Zach Charbonnet was named a semifinalist for the Doak Walker Award,  the award given annually to the best running back in the nation.

“It’s well deserved,” Kelly said. “The cool thing about Zach is I don’t know if I’ve been around a more consistent player. His attitude and mindset are the exact same thing. He never has a bad day. You know every day, it’s just like the sun coming up every day in Southern California.”

Charbonnet has rushed for 1,240 yards and 13 touchdowns on 171 carries in the nine games he’s played this season.

“Any national honor that comes around for him is well deserved,” Kelly said. “I’m happy to hear (he is a semifinalist) because he is one of the top running backs in the country.”