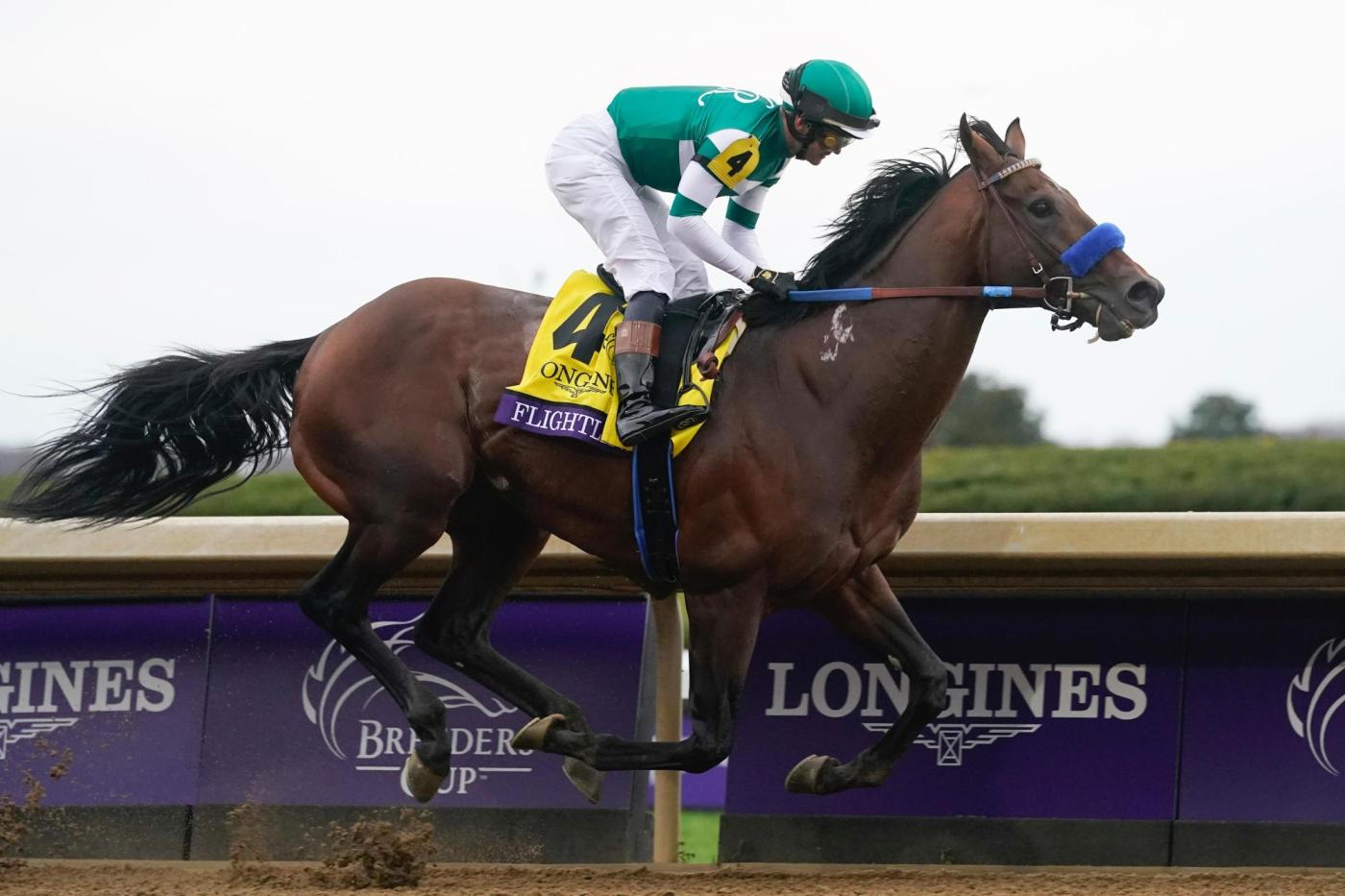 LEXINGTON, Ky. — Flightline has been retired and will stand at stud after completing a dominant, unbeaten career capped by Saturday’s runaway victory in the $6 million Breeders’ Cup Classic at Keeneland.

The son of Tapit will begin his breeding career next year at the farm in Versailles, Kentucky, Lane’s End Farm announced in a news release Sunday morning.

Santa Anita-based trainer John Sadler’s pupil lived up to the hype in the biggest race of his career, starting from the No. 4 post. He and Todd Pletcher-trained Life Is Good (8-1) soon jetted away from six other horses at a blistering pace to form their own match race through the far turn.

By then, Flightline had begun reeling in Life Is Good, drawing even as they turned for home and taking off from there.

“Brilliant is his normal,” Sadler said afterward. “He didn’t disappoint, and never has. … He’s just a remarkable, remarkable horse.”

Flightline earned $3.12 million with the Classic win to increase his career total to $4.514 million. He all but solidified his stock as Horse of the Year when the Eclipse Awards are announced in January.

Flightline’s ownership syndicate, comprised of five groups, has yet to determine a stud fee. A 2.5% fractional interest in Flightline will be auctioned on Monday at Keeneland ahead of the track’s November Breeding Stock Sale.

“We would like to thank trainer John Sadler and his team for the incredible work they did with Flightline,” Lane’s End’s Bill Farish said. “His historic performances are a credit to their expertise and unwavering efforts to bring out the very best in the horse.”

The announcement quickly answered the post-race question about whether Flightline would follow up his Classic win with competition as a 5-year-old or head straight to the breeding barn.

The horse was especially peppy early Sunday morning at Keeneland, alternating between chomping on his feed and bobbing his head up and down as onlookers snapped photos.

“We came. We saw and we conquered,” Sadler said, adding that Flightline will spend a few days there and have a showing at Lane’s End.

Flightline won the Classic race before a capacity crowd of 45,973 just two years after the previous Breeders’ Cup was held without spectators because of the COVID-19 pandemic.

Ryan Moore won the Bill Shoemaker Award as the Breeders’ Cup’s top jockey with three wins, including Filly and Mare Turf aboard Tuesday. He also had three seconds. Irad Ortiz Jr. also had three wins but one runner-up finish.

Trainers Charlie Appleby and Aidan O’Brien each won three races, with Appleby achieving that mark for the second consecutive year.

Also Sunday, trainer Steve Asmussen said Epicenter was resting in his stall after undergoing surgery to repair a lateral condylar fracture of his right front leg.

Jockey Joel Rosario pulled up the 5-1 second choice on the backstretch in the Classic and he was taken to Rood & Riddle Equine Hospital. Asmussen said veterinarian Larry Bramlage inserted two screws to stabilize the injury.

“Dr. Bramlage and the Rood and Riddle team are very happy with how the surgery went and the prognosis is excellent for him to be a healthy sire,” Asmussen added.