When Will Bitcoin’s price finish its consolidation?


Since dropping below $30,000 a few weeks ago, Bitcoin has had a prolonged period of price consolidation. At one point, we thought the coin was finally ready for a breakout. It pulled up to test $32,000 only to fall back once more. So, when will this consolidation phase end? Here are some highlights: 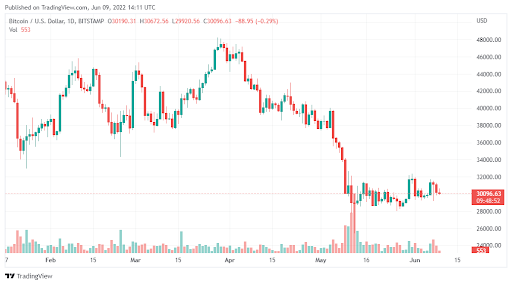 When will the consolidation end?

It’s hard to say how long this consolidation will take. But two things can happen. First, BTC may lose its resilience and plummet below $28,650. This will trigger a massive sell-off that could see a decline of at least 20%.

The second scenario is more favorable for bulls, but only to a certain extent. You see, despite consolidating between $28,650 and $30,700, Bitcoin has failed to break out decisively. In fact, at the start of the week, we saw the mega-cap surge towards $32,000 for the first time in weeks. However, a pullback came almost instantly. This suggests that upward momentum is very limited for BTC.

In fact, the coin will likely need about two weeks of low volatility trading to develop enough momentum for a decent uptrend. As long as the price action stays above $28,650, a consolidation phase of two weeks should be enough.

So far, BTC has seen a net loss since the start of 2022. Some analysts are now warning that the coin could struggle to clear $38,000 over the coming six months.

There is also some worry that the correction we are seeing right now in crypto hasn’t really bottomed yet. Downside risks for BTC could put enough pressure on the price and push it well below $25,000. However, recovery after that will be almost certain.